The importance of designing draft angles for injection molding 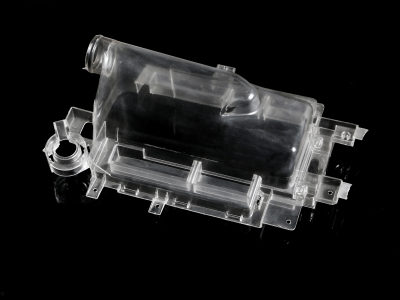 Draft angles are a hassle. As designers, we like to work with straight, perpendicular models that can be easily read, measured and modified. Instead, we're required to deal with trapezoidal shapes that can impact functionality, fit and aesthetics due to the addition of the draft. 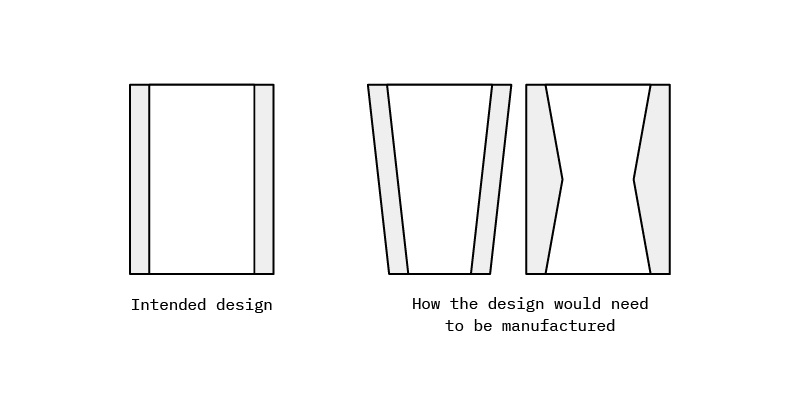 Why draft angles are important

However they are a required feature. A functional part for injection molding has to have drafts facing both cavity and core sides to reduce the risk of damage to the parts and ensure ejection. As the molten plastic flows into the closed die and fills the cavity, the material shrinks inside the mold upon cooling and as a result grips the core. 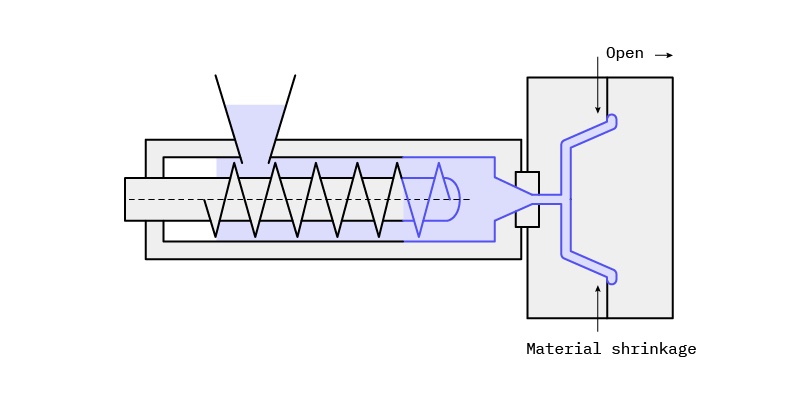 Without any taper, the part would come out scratched while increasing wear and tear on the mold and shortening the tool life. Even worse - if the part does not eject, it requires a production halt to manually peel it off.

What’s also important is to overcome the vacuum forces by letting air in between the metal and the plastic for the part to release properly. Adding an adequate draft angle ensures that warpage upon ejection is prevented while maintaining a decent cosmetic finish.

Therefore, instead of having numerous pins or sleeves to push the part out of the core - you leave a lot of room for cooling channels that significantly cut down your cycle time. As a result, you get a more competitive per unit price for your project which plays a huge role at high production volumes.

Note: On average around 70% of the cycle time during the molding is attributed to cooling

To sum up, adding draft angles to your design:

There’s no universal formula that would tell you exactly what draft angle you have to implement to your design, but there are some factors for you to consider:

Deep pockets and cavities need a steeper draft angle to assist overcoming the vacuum and the friction forces as the part is pushed out from the core.

Rule of thumb: Add 1° of angle per inch of cavity

Texture of the part dictates the minimum draft. A smoother surface, such as a mirror finish, is easy to push out and thus to cut down on scrap rates. For light textures, a 1-5 degree draft is appropriate. Complex textures like leather or snakeskin introduce micro-undercuts and would demand a 5-12+ degree draft.

Learn more about designing draft angles in the video below, which also includes a practical demonstration in Fusion360.

The more the plastic thermally shrinks, the larger the draft must be. In addition - strong, brittle and abrasive materials would naturally require a larger taper than those that are soft, ductile or self-lubricating.

Nylon, for instance, is very forgiving and does not necessarily need a draft angle, although a standard 2 degree taper is always recommended.

At the end of the day, draft angles are a necessary evil. Designing them correctly is key to obtaining a competitive cost and potentially shorten the lead time. A few key points to have in mind:

How to design parts for injection molding

How to design parts for injection molding
A complete guide to Injection Molding with basic & advanced design tips, including design guidelines for snap-fits, living hinges, undercuts and surface finishes.
Next

Key design considerations for 3D printing
A list of things to keep in mind when designing a model for 3D printing - regardless of the technology that you will be printing with.