Getting to the podium with Hubs

Find out how the Mondraker bicycle company used Hubs to create custom bike parts in time for its pro mountain bikers to podium at Maribor track in the 2021 UCI Mountain Bike World Cup. 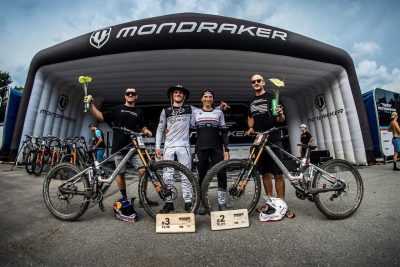 Most price competitive and lead times as low as five days

“The bikes are prepared for every downhill course, but this rider had some different needs for this particular track. The suspension is very sensitive and he knew he needed different settings for this particular part. Using Hubs, we managed to source custom parts in time for the race—and made it to the podium”

Mondraker has been building high-performance mountain bikes and components for more than two decades. Right from the start, the Spanish company offered aggressive freeride and downhill dual-suspension bikes, and have since developed a distinctive frame geometry, with long top tubes and radically short stems, advanced rear suspension, and a range of e-bikes.

Today, Mondraker fields teams of pro mountain bikers who specialize in downhill, cross country, and marathon racing. Staying competitive at a world-class level demands hugely talented riders and top-notch bikes. Gearing and suspension settings are fine-tuned for each rider and race weekend to convert the racers’ efforts into maximum speed.

The Mondraker race team used the Hubs platform to go a step further and create custom suspension pieces to cater to the individual preferences of their downhill racers, making the bikes more competitive and leading to the best race results of the season—without having to build new parts in-house, and with a turnaround time that wouldn’t have been possible using traditional techniques.

Racing isn’t just about championship standings and putting Mondraker riders on the podium—a race season is prime time for “works” riders to give feedback to engineers and help find ways to improve the bikes, iterating throughout the season to gain and maintain a competitive advantage.

Mondraker downhiller Laurie Greenland is particular when it comes to bike setup. During the round in Les Gets, France at the beginning of July, Greenland had an idea. He wanted to tailor the rear suspension linkage geometry for the infamously rough rock garden at the next championship round in Maribor, Slovenia. It was just over a month away.

To get an idea of the extreme conditions these bikes go through, and how critical it is that the parts all function properly, check out this video of Greenland at the Welsh round of the UCI Championship:

Racing to the finish

Given the tight timeline and geometry of the parts, Mondraker needed a different manufacturing solution than their standard supplier. “The part was complex in shape, and had to be produced fast and with high accuracy,” said Molina. "The fact that Hubs made it possible to make parts in a short period of time and with custom specs was something we were really interested in.”

Manufacturing shops often have packed production schedules and limited capacity. It can be a challenge to quickly provide pricing quotes and accommodate last-minute requests. By using Hubs, Mondaker race engineers were able to upload the CAD of the new design, receive an instant pricing quote, order prototypes from vetted manufacturers, and install the new parts before Greenland’s bike was set to thrum over Maribor’s rock garden.

“Our engineers were happy with the parts,” said Molina. “It was done so fast and worked really well. Working with Hubs saved us months sourcing parts.”

From part production to podium

The high quality of the parts doesn’t tell the whole story–it was also more convenient for the Mondraker engineers, because they were able to focus on design rather than fabrication or sourcing suppliers. They simply used the Hubs network to order the parts from a vetted supplier—which saved the Mondraker team the headache of contacting multiple suppliers to determine who might be able to deliver the parts on time…or of having to produce the parts themselves. “It is an easy-to-use platform,” said Molina. “We just uploaded the file and sent the parts to production. Almost no emails were needed.”

The end result? The year’s first podium finish for Greenland, who brought home 3rd place in the Elite Men’s division, and a podium for his teammate Eleonora Farina, who came in 2nd place in Elite Women.

Hubs excels at sourcing complex or cosmetic parts and high-mix orders. In addition to short lead-time prototypes needed for racing, our network can also be used for the serial production of bikes.

Molina explains that the Mondraker team plans to continue this iterative development cycle. “We wanted to keep testing with the riders for future developments. Even really small changes can be perceived by top riders in extreme conditions. Those new parts helped us to get more data from the telemetry, test new ideas, and get good feedback to better understand what each rider feels and needs.”

When parts sourced from the Hubs network can make it to the podium of one of the roughest World Cup downhill races, it is a good indication that distributed online manufacturing has far-reaching potential in the world of bike design and manufacturing. Our DFM tools and quote versioning make it easy for engineers to experiment with different tolerances, geometries, and finishes, assessing the impact on lead times and pricing. The quick turnaround of part production also makes it possible to quickly test and optimize prototypes, but we can also offer end use parts in low-volume batches meaning that an entire batch of bike models can be manufactured through Hubs.

The rise of high-quality, quick-turn, custom parts is paving the way for smoother, more personalized cycling. In the future, it may become standard for every person to fully customize their bikes based on their personal needs and preferences.

Find out how other companies are using Hubs to speed up innovation .

3 museums recognizing women in STEM
Learn about the women who have played a pivotal role in science, technology, engineering and mathematics (STEM) by exploring these three museum resources.
×