Eindhoven’s University of Technology is home to PhD candidate and Healthcare Flagship Program participant, Mark Thielen, who is on a mission to increase surgical and procedural success for neonatal patients. 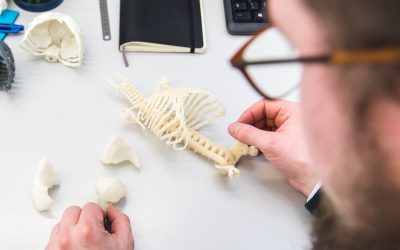 Eindhoven’s University of Technology is home to PhD candidate and Healthcare Flagship Program participant, Mark Thielen, who is on a mission to increase surgical and procedural success for neonatal patients. Using 3D printing and Hubs, he’s creating the best possible training experience with updated mannequins capable of intelligent sensor feedback with functional organs.

For surgeons and nurses, experiencing as close to the real thing as possible is incredibly important to the success of surgeries and medical procedures. Within the neonatal field, it’s incredibly difficult to the current state of practice mannequins. Neonatal mannequins aim to closely simulate patients up to the age of one month for practicing procedures such as intubation, injections and CPR amongst others.

Mark’s research is to create mannequins that go beyond the current basic simulation by developing manikins which have all their major internal organs functioning and equipped with sensors to monitor key measurements such as pressure, stress and impact. Having data points across the mannequin’s’ vital organs means that everything can be measured when practicing such things as CPR, where too much pressure on the lungs or heart can be the difference between life and death.

The reason 3D printing is being applied in this area is a combination of the vast materials available for testing and, most importantly, the organic shapes you can create with them. Mark explains why he’s using 3D printing:

“Without 3D printing, this work would have been impossible. The sheer complexity of human anatomy is very hard to recreate realistically with any other production method, not to mention the cost and time differences.”

In Mark’s quest to find the material that acts most like a newborn’s internal structures, he’s gone through over 15 different materials, testing them to find out their properties under stress. Mark has used an array of 3D printing technologies, including Fused Deposition Modelling (FDM), Laser Sintering (SLS) and Multi-Material Jetting (MJ). There are two key components to the mannequin: the ribcage, which acts as the housing for the second component, the internal organs, which provide information. 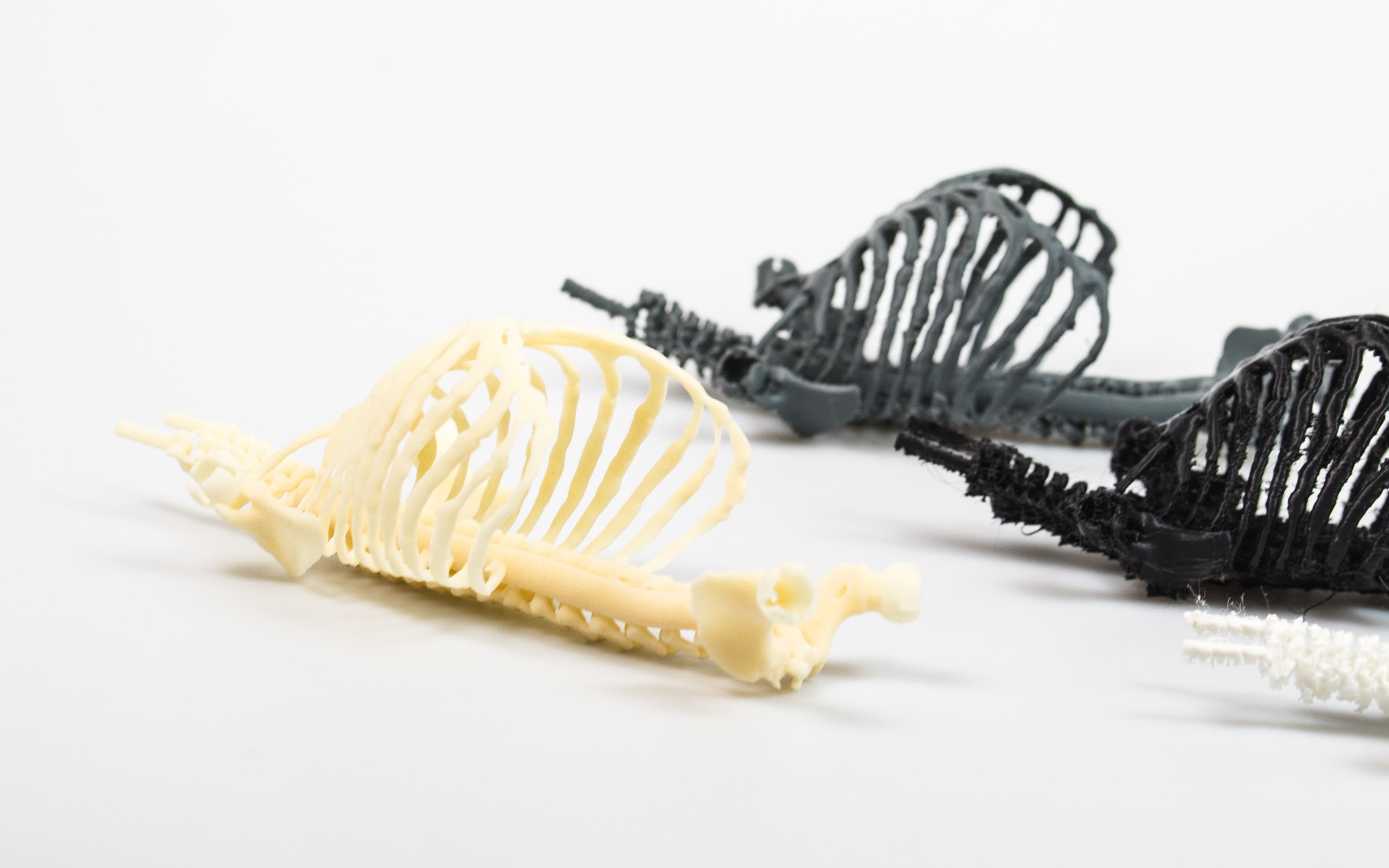 Various ribcage prototypes in a variety of technologies

“3D printing helped this research by enabling the synthesis of models for testing in a swift and detailed manner. As this research focusses on the physical realm, it is important that we work with physical models rather than just virtual ones.” 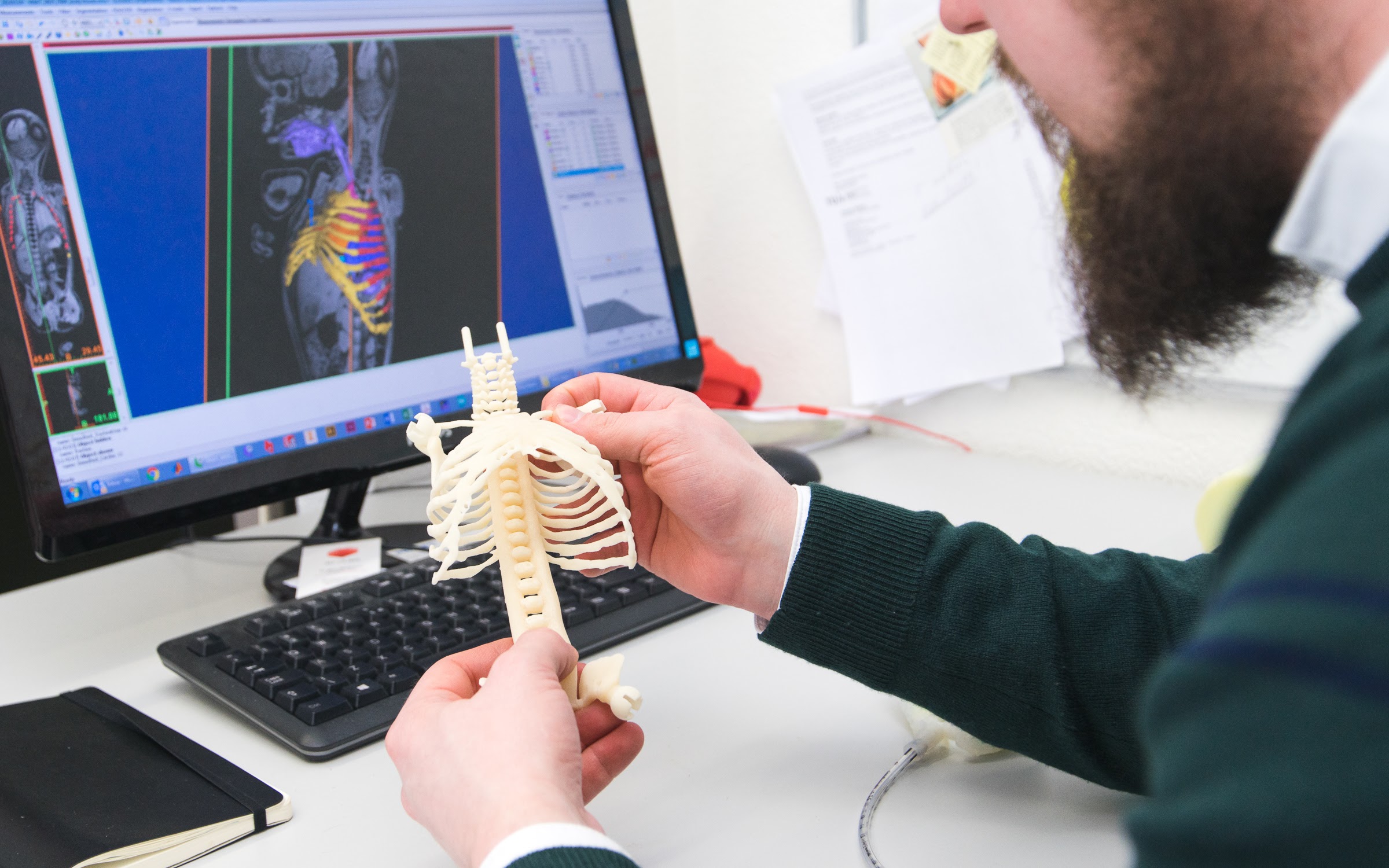 Mark checking the 3D prints in line with the MRI scan

Interaction with anatomical models is a critical part of the training and preparation for surgeons and nurses. Within the neonatal field, it is difficult to realistically reproduce accurate haptic feedback using current practice manikins that lack the complexity and feel of a newborn patient. Mark’s research aims to develop manikins that have all their major internal organs "functioning", while being equipped with sensors to monitor key measurements such as pressure, stress and impact during trial procedures, like CPR or intubation.

Organs for the mannequins must have the ability to be functional and printing a scan of an organ can be done on most pieces of 3D printing technology. Difficulty arises when you need that 3D print to move and act like a baby’s organs would. Material Jetting 3D printing (PolyJet) was used to create molds instead of traditional methods because of the inability to rapidly change the molds if needed and also the shapes needed, Mark explains:

“Due to the extremely small sizes of neonatal organs, as well as their minuscule detail, the only way to create a mold for these parts was to 3D print them.” 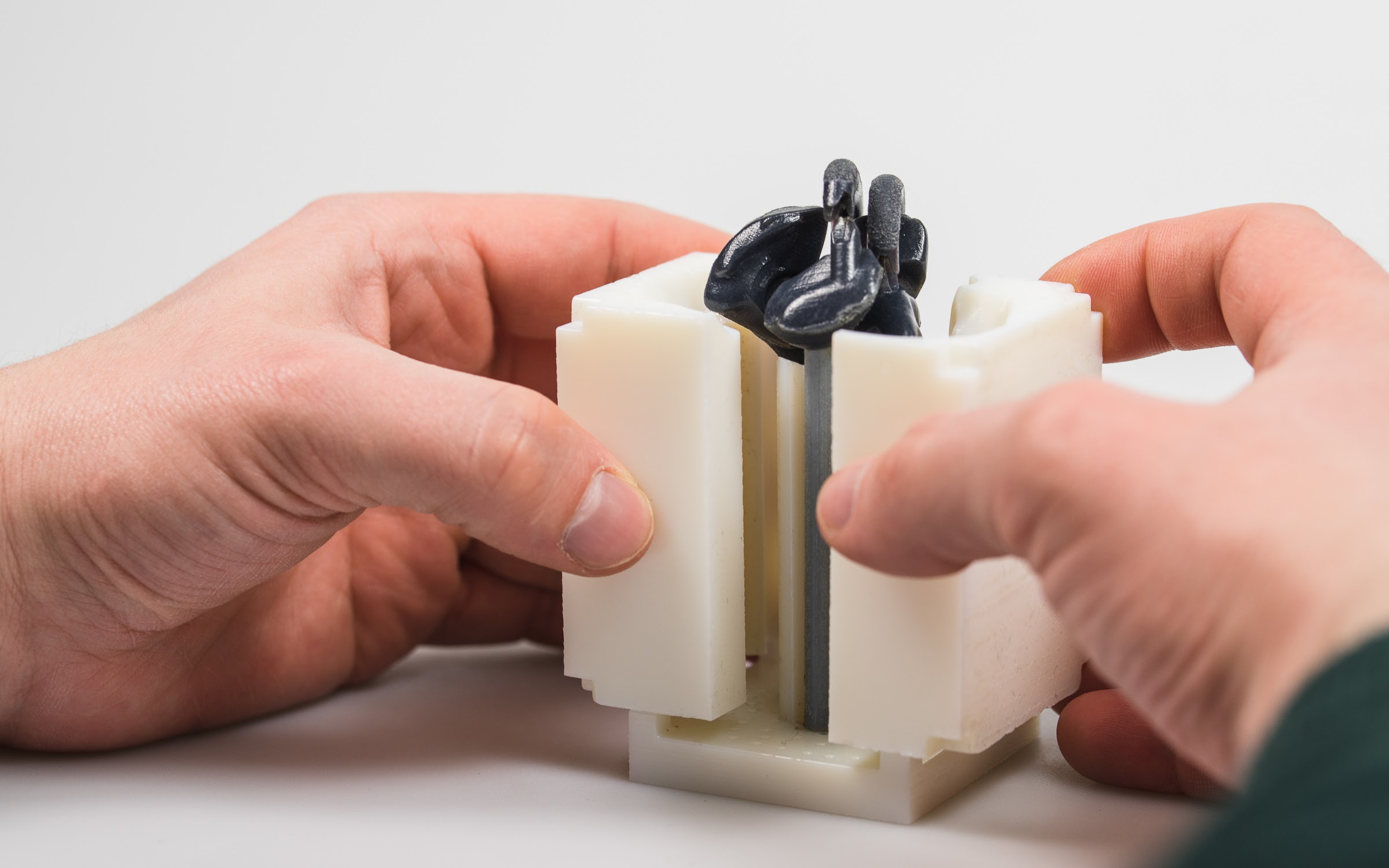 The 3D printed mold being assembled.

Because a very soft flexible material was needed to simulate the internal organ behaviour, it was decided that the parts would be molded using silicon. Instead of 3D printing the parts, Mark decided to use Material Jetting to print the molds. VeroWhitePlus, a rigid opaque plastic, was used as the outer mold and TangoBlack, a flexible plastic, as the inner cores of the model. 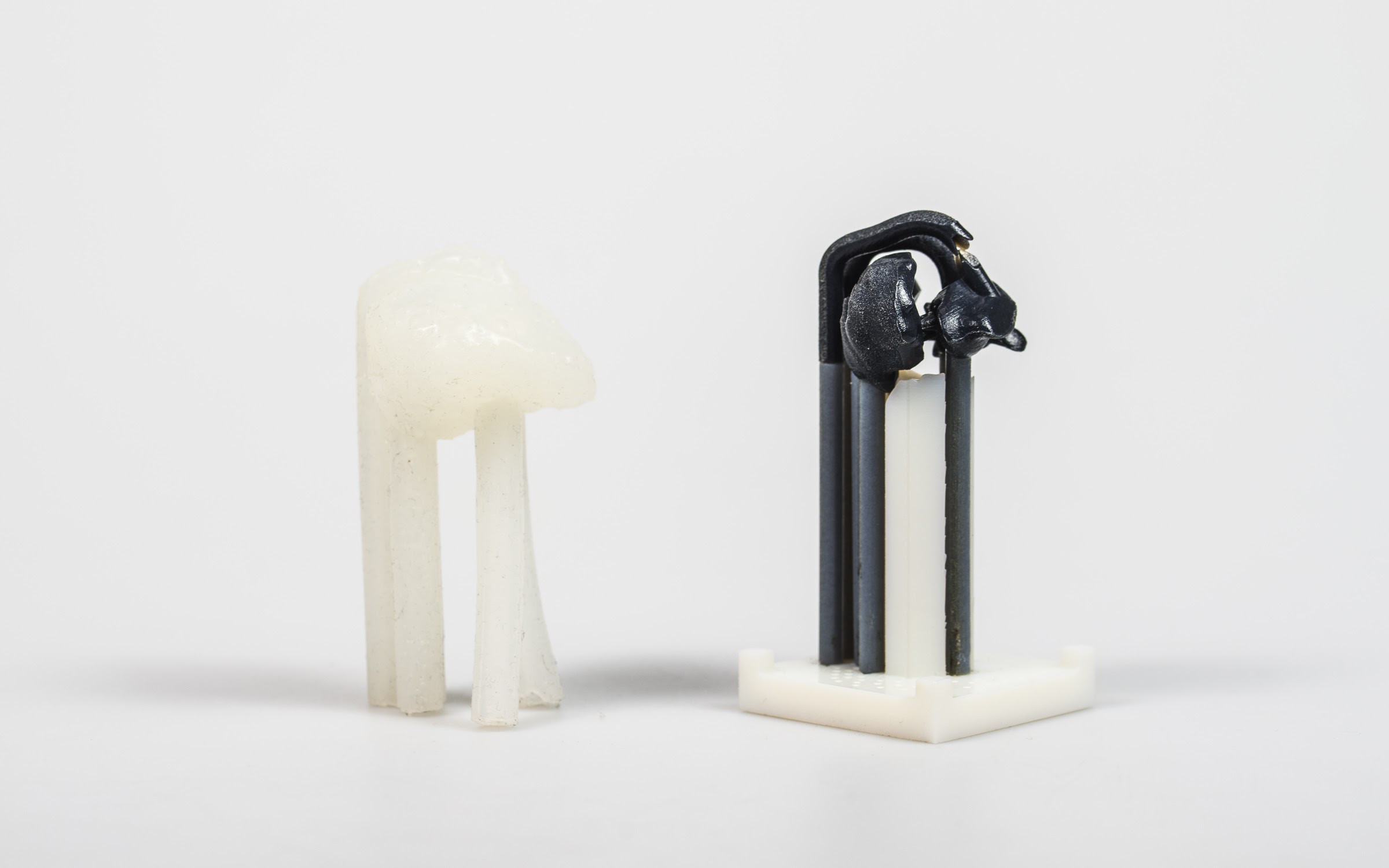 The outer mold (white) and inner core (black) of the mold shown here were used to produce a hollow functional silicon model of a lung.

The inner cores of the mold needed to be flexible and were made as multiple components,to ease their removal after molding and prevent damaging the silicon parts. Material Jetting was also chosen due to the extremely small size and intricate geometry of neonatal organs. The heart, for example, required highly detailed working valves in the mold, something only made possible by the high resolution of the Material Jetting process. 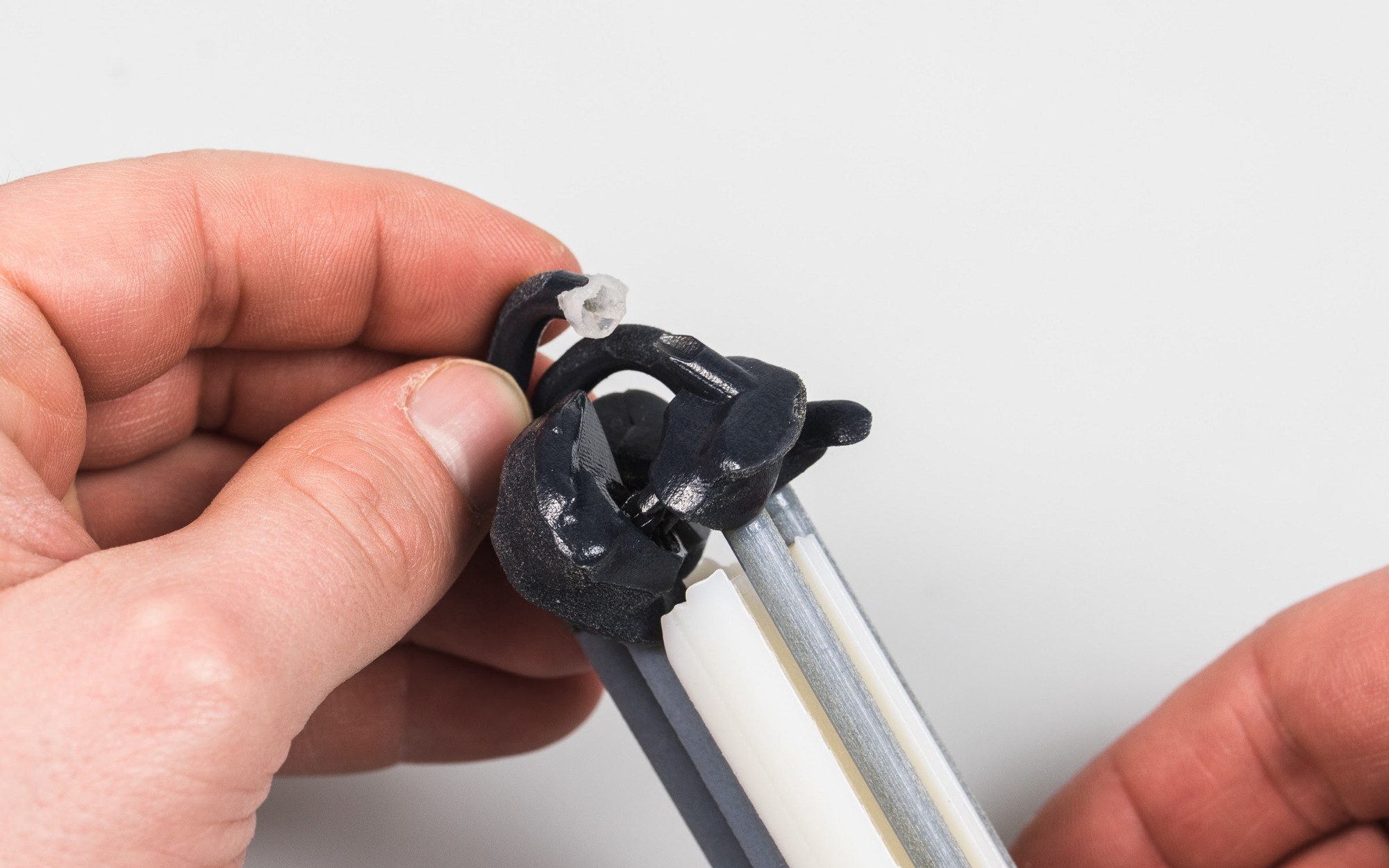 When the ribcage and organs were combined, cameras and sensors were installed throughout the manikin and fluid was run through all the cavities, giving feedback on every part of the model as the system was subjected to various simulated trial procedures. 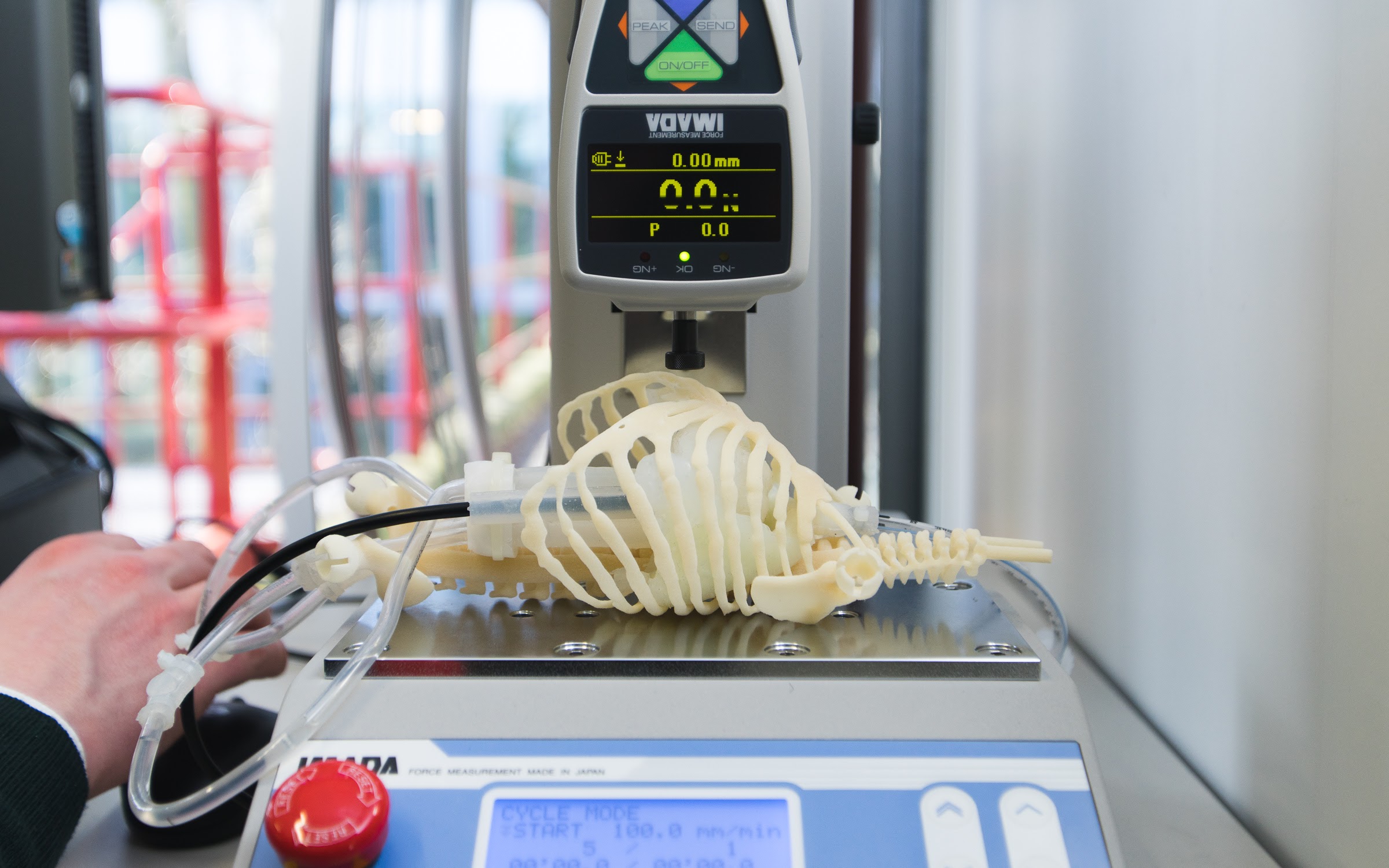 The assembled internals of the neonatal manikin under compression testing

Mark’s research into the creation of hyper realistic manikins does not stop at neonatal patients with there being potentially wider applications. He goes on to explain:

“I believe that developing and advancing what we started here can aid medical research in a broader scope. We could potentially create realistic patient models of other body parts to strengthen medical training for emergency procedures and pregnancies.”

1 million parts made, our path towards distributed manufacturing

CAD modeling #3 - Snap fits
This is a continuation of the previous tutorials on 3D modeling an enclosure. In the previous two articles a two-part housing was created followed by the addition of a living hinge.
Next

1 million parts made, our path towards distributed manufacturing
Hubs was founded in 2013 with the manifesto of becoming the supportive infrastructure that would allow people to manufacture parts locally. It’s been over 4 years since that manifesto was written and today the 1,000,000th part was completed on Hubs.
×