Fed up with the daily commute? This design student created his own mode of transport using the latest 3D printing technology

The student's problem was simple, find a method of transport that was faster than a bike and didn't rely on multiple forms of public transport. 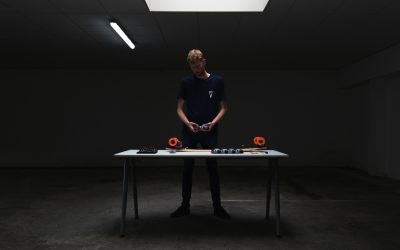 When this student (Jack Davies) moved from the UK to Amsterdam to begin his internship at Hubs, a 3D printing start-up based in the Dutch capital, he was looking to find a faster mode of transport to get to the office on a daily basis. Utilizing his design skills, knowledge of electronics and access to new 3D printing processes, such as HP's Multi Jet Fusion technology, he created a 3D printed electric skateboard that previously wouldn't have been possible.

The student's problem was simple, find a method of transport that was faster than a bike and didn't rely on multiple forms of public transport. Using the latest 3D printing technology, Jack created the Fusion E-Board in less than a week, for a bit under €600 (€350 standard parts + €250 custom 3D printed parts). In its specifications, design, and parts, the board is comparable to other commercially available electric skateboards worth upwards of €1500.


Jack, a product design student at Nottingham Trent University, began his design process by identifying the main components of the longboard; trucks, deck, and wheels. These were off the shelf parts so these were used as the starting point of the design. He then used Autodesk's Fusion 360 software to quickly model components inside of the main assembly and simulate them to ensure parts would be strong enough, especially the motor mounts which held the motor in place. This simulation also allowed for the design to be optimised, reducing the size and cost of the mounts, as less material was needed to create them. 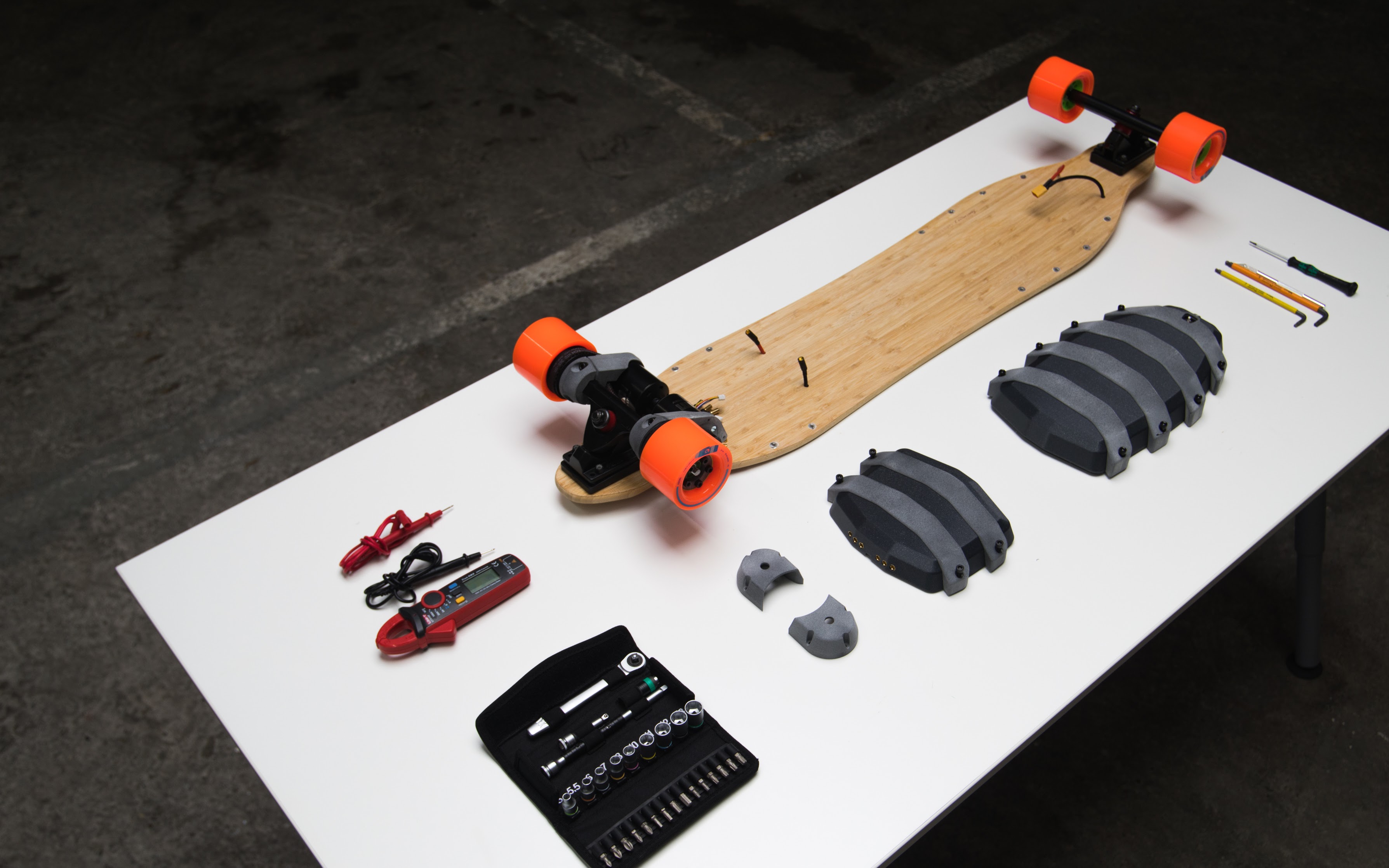 The first stage was to design the drivetrain, this includes the motor mounts, gearing setup and included some modifications to the trucks. The size and position of the motor mounts would dictate the size and location of the enclosures so it was important that this was completed first. He goes on to explain:

"I calculated the desired top speed and torque requirements which then enabled me to select the motors and battery for the board. The gearing ratio was also calculated and the pulley sizes were selected, along with the drive belt length. This enabled me to work out the correct size of the motor mounts which ensured a well-tensioned belt. The next stage was to design the battery and speed controller (ESC) enclosures."

The selected deck had design implications too, as it was predominantly comprised of bamboo. Using a bamboo board meant that it was bending substantially in the middle. This had the advantages of being comfortable to ride, as it absorbed the bumps in the road, and didn't transfer them to the rider. However, this also meant that a split enclosure was needed to house the battery and electronics, as a full-length enclosure wouldn't be able to flex with the board and would make contact with the ground during operation. 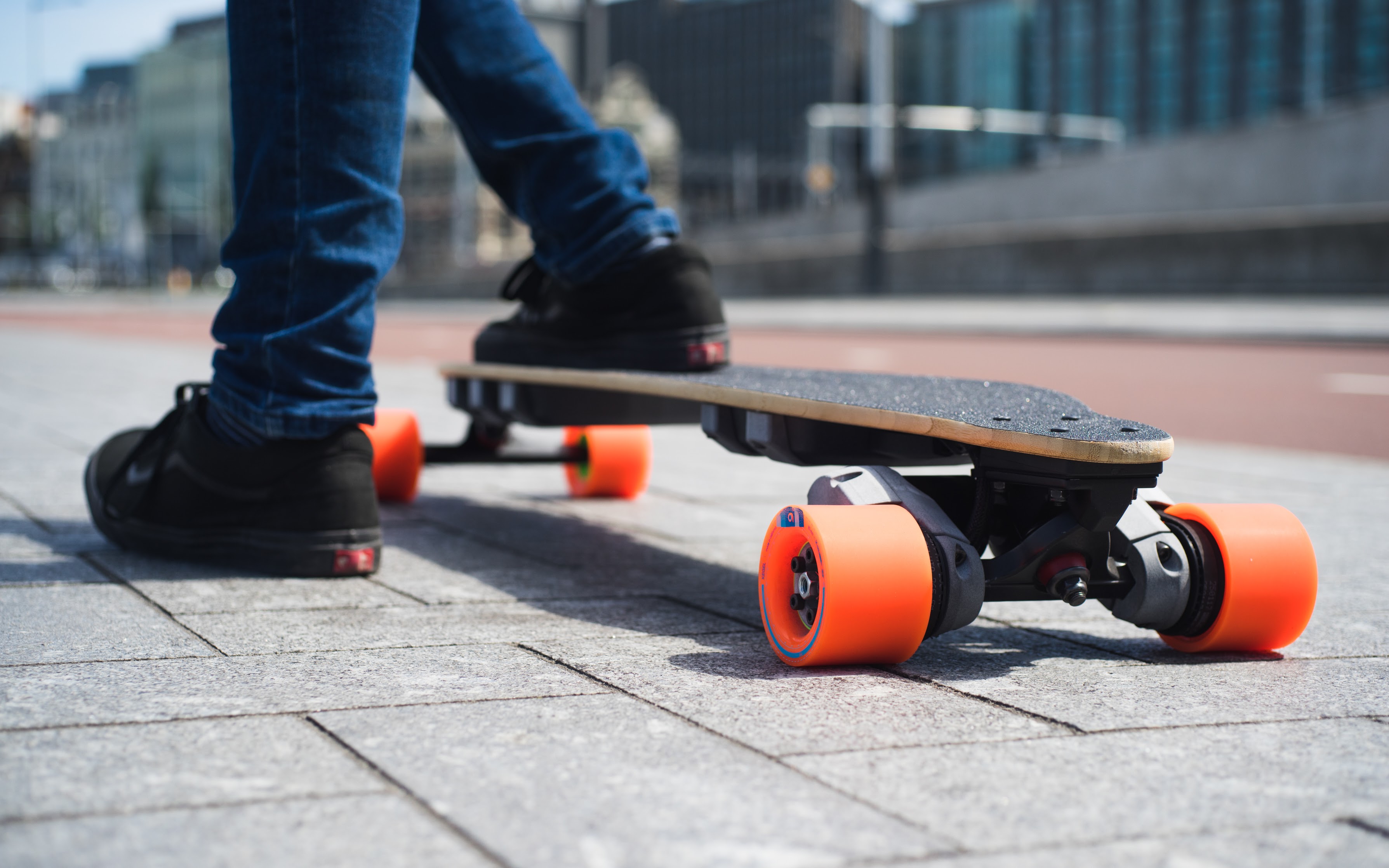 For the custom enclosure parts needed, he utilized the services of the company where he was interning; Hubs. This allowed him to access the latest industrial 3D printing technologies. In this case the HP Jet Fusion 3D 4200 Printer, where he didn't have to own the machine to take advantage of its capabilities.

Jack described his main challenge when creating the Fusion E-Board:

"Ensuring that the more expensive printed parts would be compatible and function correctly on the first try was the most critical part of the project. I had tight budget constraints which meant it wasn't possible to reorder any parts if there were any mechanical conflicts with the design. A big part of getting it right the first time on the industrial machine was to prototype with low-cost FDM parts first, for fit testing."

Creating a long lasting solution to his commuting woes was key, so making a product that lasts was fundamental in the design of the board. Protecting the internal components and battery casing was crucial to this goal of longevity. Taking inspiration from human anatomy Jack designed a series of ribs along the bottom of the board to protect the central components from wear and tear when in use.

The board’s assembly is comprised of two 3D printing technologies altogether. Firstly the new HP Jet Fusion 3D 4200 Printer was used thanks to its ability to create geometrically complex shapes without giving up on part strength. The HP 3D HR PA 12 nylon parts created replaced aluminum components that ordinarily would have been more expensive and difficult to create with existing technologies such as CNC.

Other 3D printing technologies also couldn't compete with the price point and strength HP's parts offered. The protective ribs of the board were printed in Nylon as they are able to flex slightly with the board and offered a strong mounting point. HP's nylon material was also used for the drivetrain and motor mounts, this was because Jack needed a material with good heat resistance and the ability to withstand excessive stress. 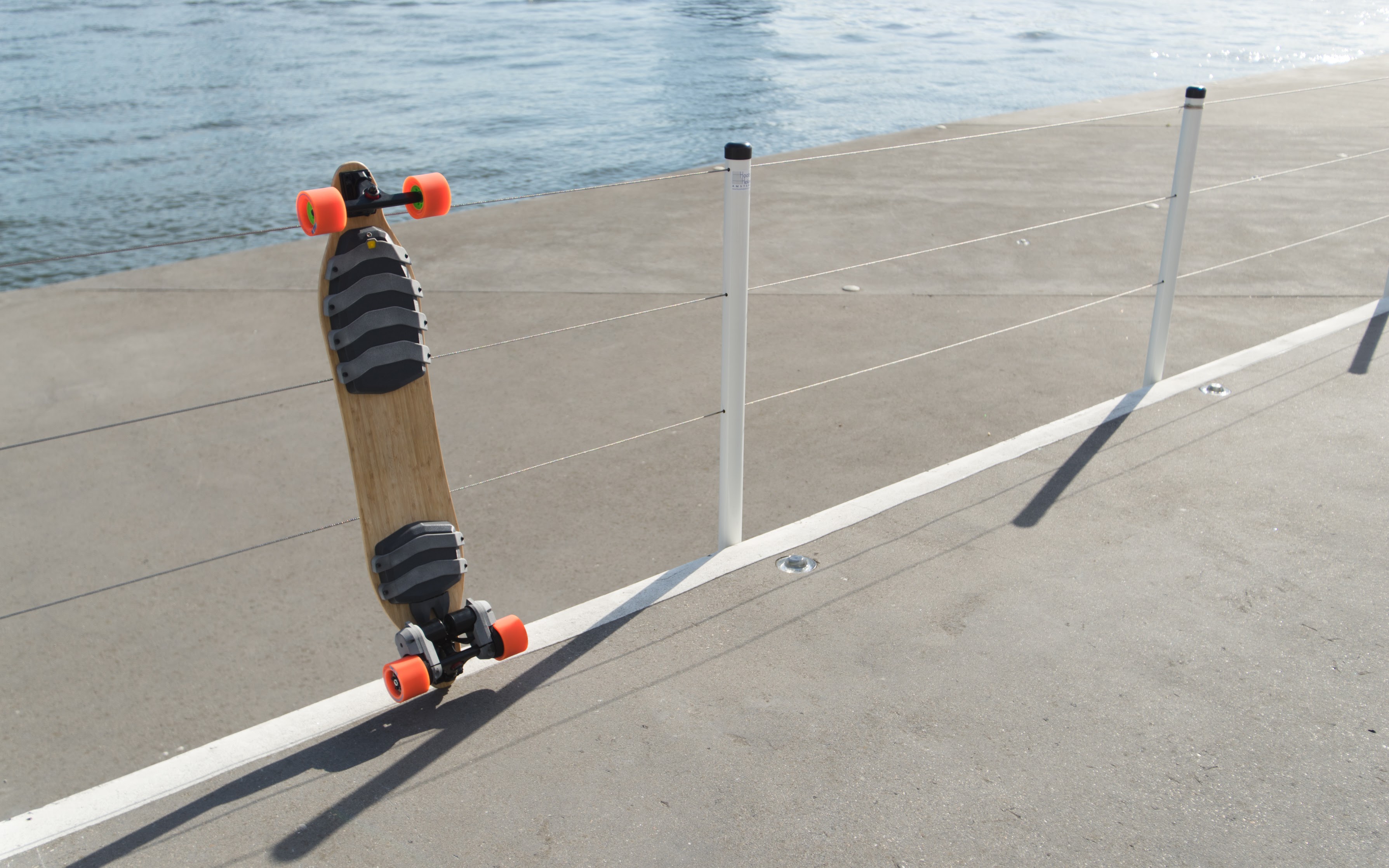 In order to save cost, desktop 3D printing (FDM) was used for the larger parts of the build, including the battery cover and pulley system. The pulley was 3D printed in ABS (the same material as LEGO) due to it offering high structural integrity for a desktop printed plastic also making it a cheap part to replace if worn out.

Jack's initial challenge which generated this creative and well-engineered solution shows how 3D printing has offered a real solution to a problem. In particular, providing a student the ability to bring an idea to life; affordably and rapidly. Jack has made the files public in the hopes that other students, designers or engineers get inspired and decide to build their own modes of sustainable transportation. 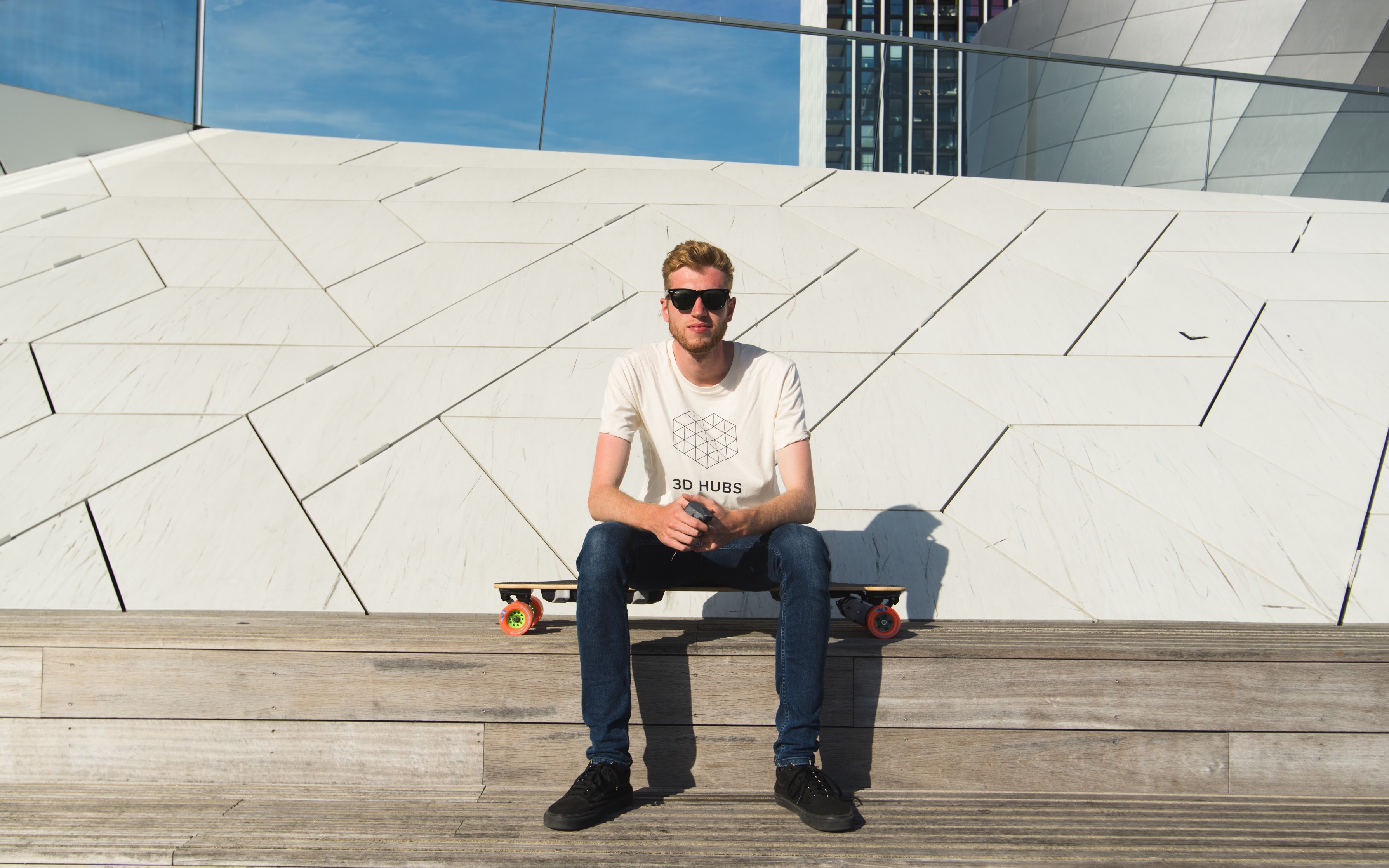 How a student created a 3D printed camera inspired by three cameras he couldn't afford
Paul Kohlhaussen, a student from Richmond in London has created a fully functioning 3D printed camera. Paul took the best features from an array of costly high-end cameras and reverse engineered them into the camera of his dreams.
Next