The TU Delft Formula Student team is one of the most successful teams in the history of the sport. Formula Student is a student engineering competition held annually all over the world where a team of students design, build, test, and race a small-scale formula style racing car. 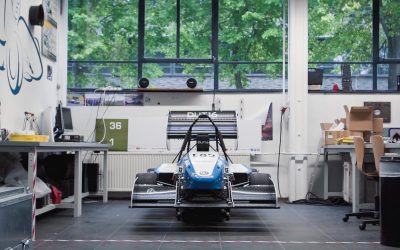 The TU Delft Formula Student team is one of the most successful teams in the history of the sport. Formula Student is a student engineering competition held annually all over the world where a team of students design, build, test, and race a small-scale formula style racing car. It attracts teams from the world’s best technical universities and judges include ex team members from leading Formula 1 teams.

Nestled in the west of the Netherlands is a city called Delft, famous predominantly for two things: its hand-painted blue and white pottery and its world leading technical university. Founded in 1842 by Dutch King William II, the university has created some of the world’s leading engineers in various fields such as Astronaut Wubbo Ockels and former MIT Dean N. John Habraken.

We sat down with their Chief Engineer Jonas to find out how 3D printing has helped them become so successful in recent years and how it’s being applied. As Chief Engineer, Jonas explained his role in the 75 strong team:

“I’m in charge of the top level concept of the car, making sure every part of the car fits the core goal which is efficient motion.”

Using tools such as a lathe, mill, carbon fibre prepreg layups and 3D printing, the Delft team have the task of building an entire Formula-style racing car in just 9 months.

The key to success within such a short time is moving quickly whilst maintaining a versatile build, so that when challenges arise, things can be easily tweaked and changed without the need to restart the entire process. This is where the advantages of 3D printing came into the process in two key application areas.

The first application of 3D printing that Delft utilized in the build of their car was the steering wheel. Not only was their steering wheel prototyped with 3D printing, the final competition design was made in the same way. 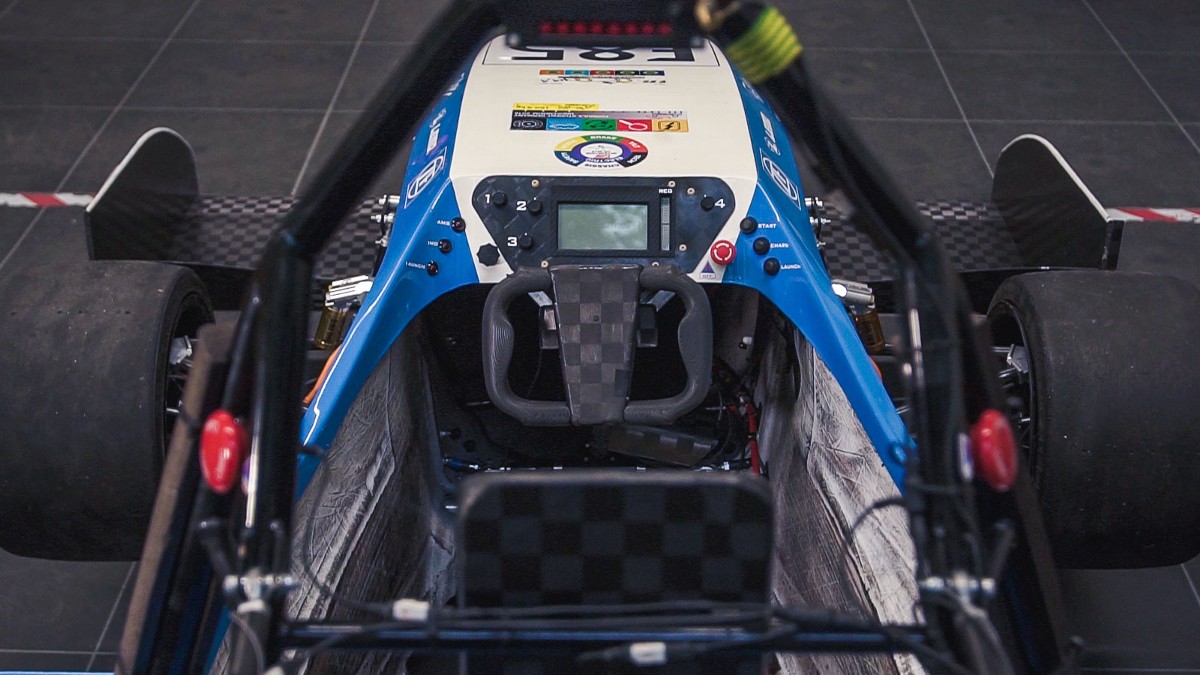 In the drivers seat. The inside of the formula student car

Having multiple drivers in the Delft team mean that they all have individual preferences and driving styles. The biggest interface between the driver and car is the steering wheel, making it a hot topic of debate for the designers on how it should feel, grip and perform.

The best way to solve the constant back and forth between the design team and drivers was to use FDM 3D printing, an affordable and fast way to go through many iterations without incurring large costs and the creation of delays in the short 9 months they have.

FDM (Fused Deposition Modelling works by extruding a reel of plastic through a heated nozzle which melts the plastic building layers which then cool down and solidify, as displayed in the video below.

The curvature and geometries of a steering wheel are an issue for CNC (Computer Numerically Controlled) mills which would need long passes around a part and would take a long time as well as being expensive. Jonas highlighted:

“A 3D Printer doesn’t care as much about those (cnc) geometry limitations, this meant we could iterate and test, iterate and test without worrying about the cost or delays”

The process of creating the steering wheel began with a very rudimentary laser cut piece of wood, with clay stacked on top of it. This was then pressed with driving gloves on to create a rough outline and 3D scanned into modelling software.

During the modelling process, they wanted to create a steering wheel that didn’t need supports so that it would print in a short amount of time meaning those iterations could be churned out as drivers tested them. The three drivers that tested the wheel were all found to be using the steering wheel very differently, with some of them using under-grip, over-grip and standard grip respectively. 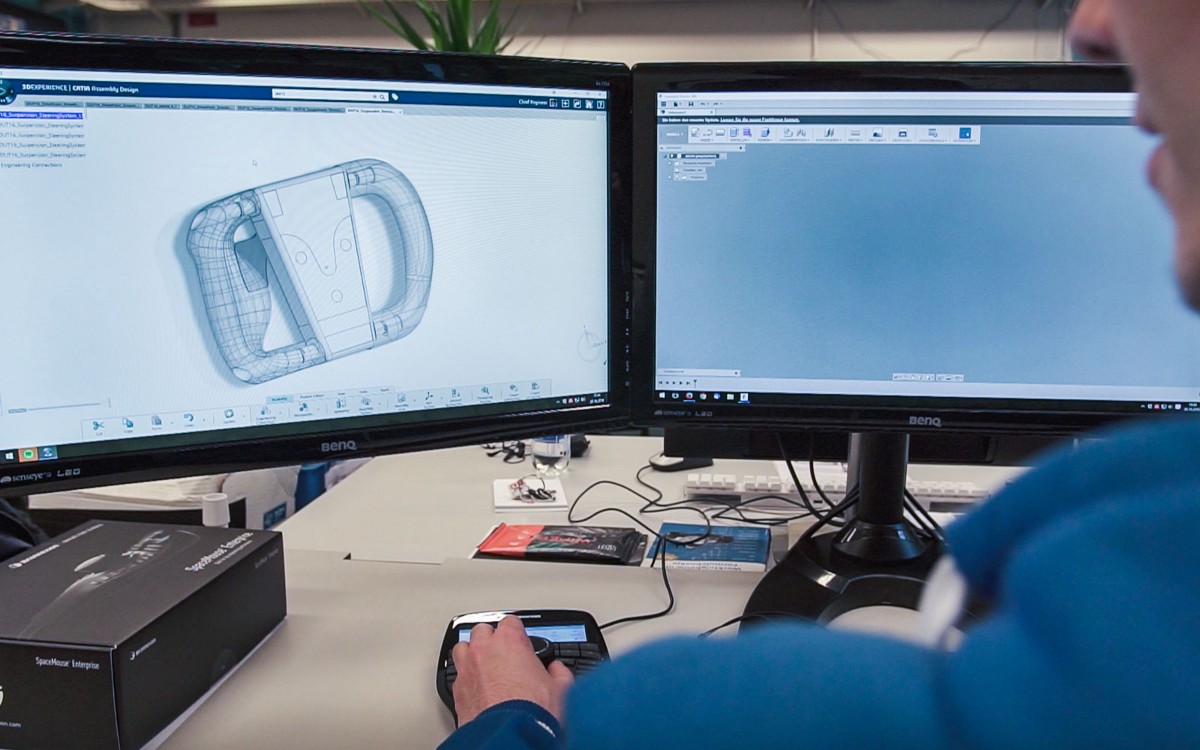 “The steering wheel is in a narrow space and needs to be able to deal with lots of force, drivers need to be able to really dig into the shape and apply force around corners. It being strong and having a good grip instills confidence in the drivers.” 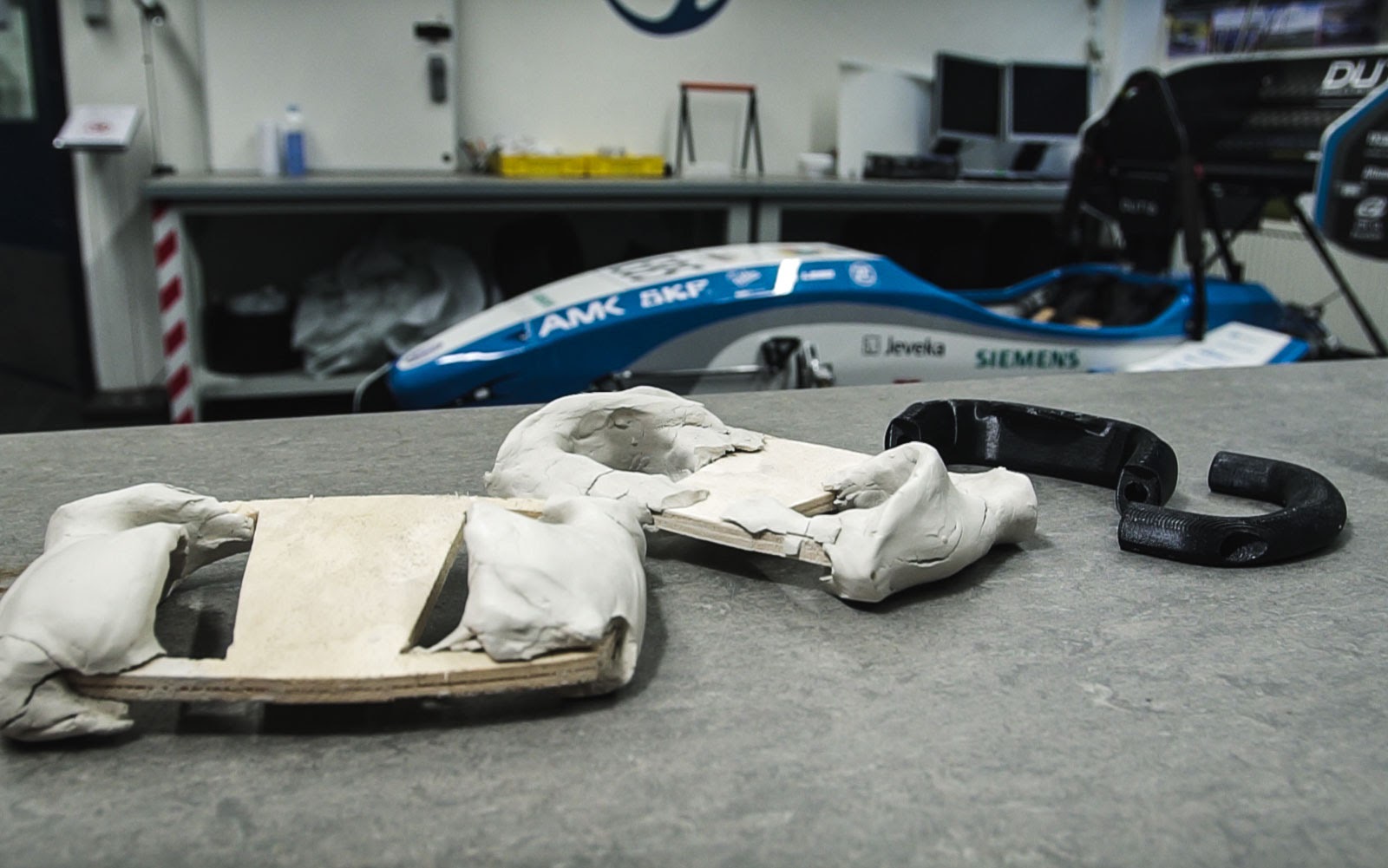 The material journey of the steering wheel went from clay, FDM PLA, FDM Colorfabb XT and the final end-use part was made with FDM Colorfabb XT- CF20. These are some of the reasons why XT-CF20 was chosen:

The steering has held up for all of the current 2016 season, with no signs of giving way helping the team to 2 out of 3 podiums this year. A great example of 3D printing offering versatility in its unique ability to adapt with low lead times and low cost. 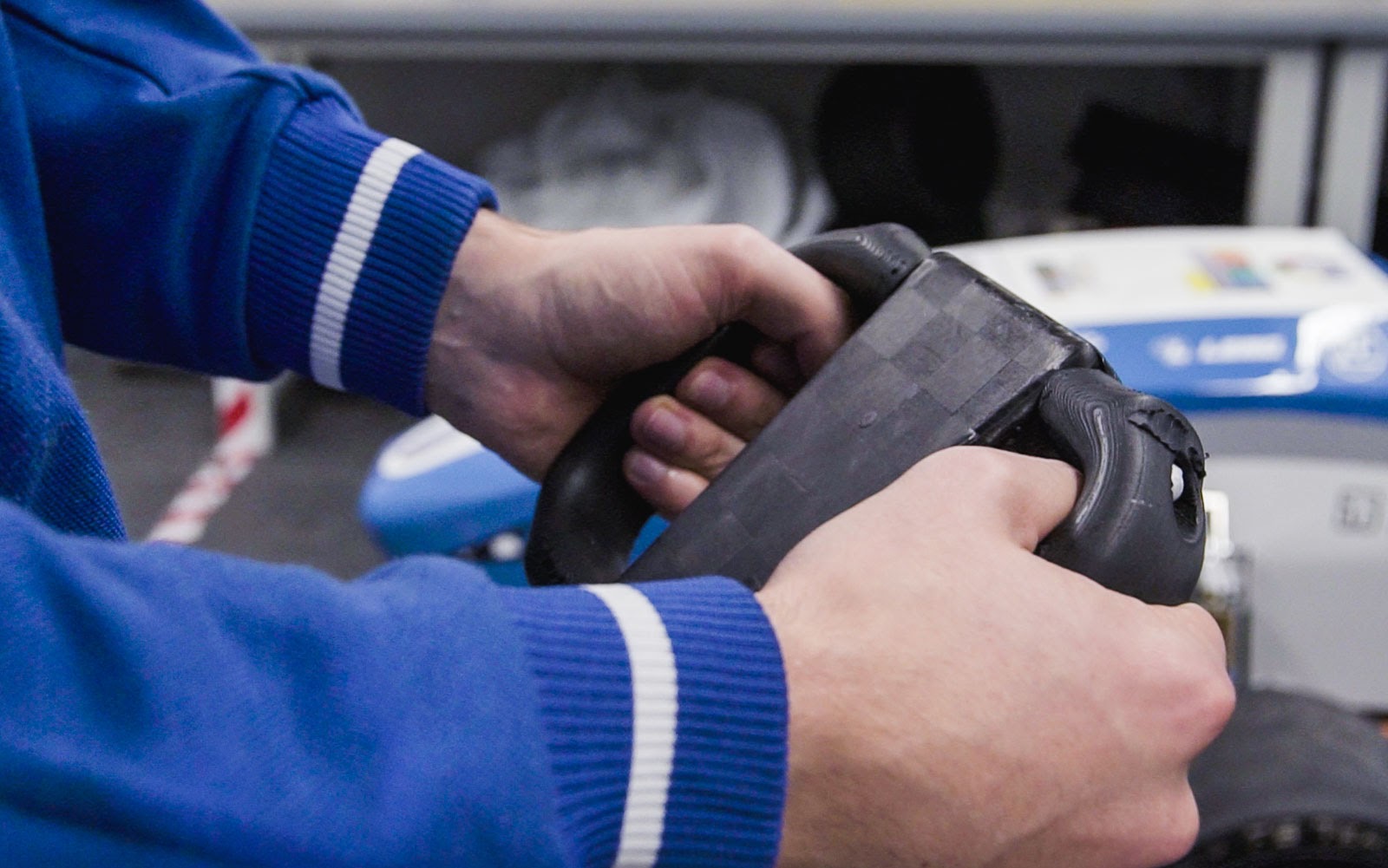 A less visible part of the car also used the benefits of 3D printing but for a different reason than price/speed. Metal 3D printing, a more familiar technology for the automotive industry, was used to create an integral bracket which connected the steering rod of the inner wheel to the front of the vehicle.

This part was created in Titanium using a process called direct metal laser sintering (DMLS) whereby a mechanical arm spreads a thin layer of fine titanium powder down onto the print-bed while a powerful carbon dioxide laser melts the powder and fuses the titanium together.

Due to the powder bed technology of the printer, the geometries that can be made can be extremely complex. Having a complete bed of powder that is sintered means that the object doesn’t need complex support structures as it’s surrounded by powder, unlike FDM which is extruded, not sintered. Jonas explained:

“The reason we used titanium 3D printing for the part was that it simply couldn’t be made in any other way, we needed very specific geometries for the loads that were being applied”

Consideration was given to the compression forces and heavy vibrations components would be subjected. The component traditionally would have been a relatively large assembly but thanks to the design freedom, they were able to create the bracket in one piece making it lighter without comprising strength.

The Delft Formula Student Team has highlighted two different applications, with two different technologies that make take advantage of the benefits they provide. 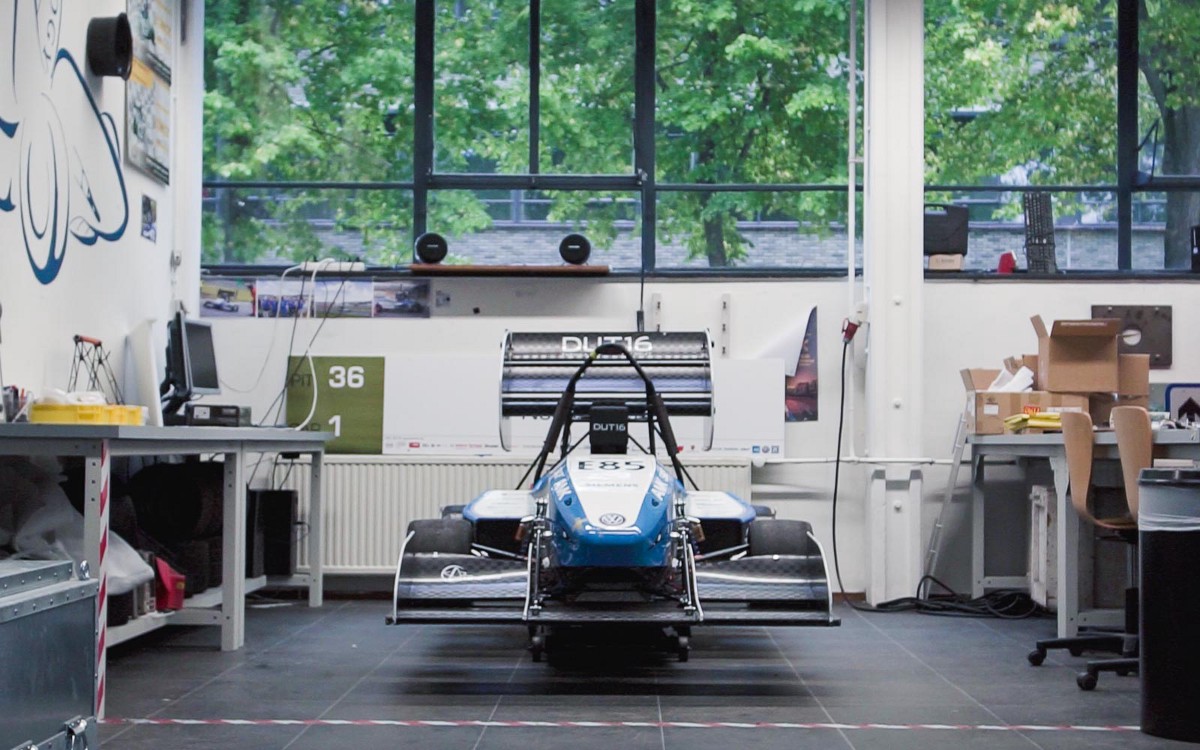 Front view of the race car displaying its aerodynamic build

As 3D printing becomes more accessible and continues to develop a greater range of materials, geometries and applications will become apparent in the automotive industry. Formula Student in the upcoming years is sure to be a hot bed of innovation and I’m excited to see how the cars develop alongside the technologies available.

1 million parts made, our path towards distributed manufacturing

1 million parts made, our path towards distributed manufacturing
Hubs was founded in 2013 with the manifesto of becoming the supportive infrastructure that would allow people to manufacture parts locally. It’s been over 4 years since that manifesto was written and today the 1,000,000th part was completed on Hubs.
Next