Getting a satellite into orbit is not an easy task, especially when you’re trying to do it in 12 months with a strict budget in mind and for the first time. 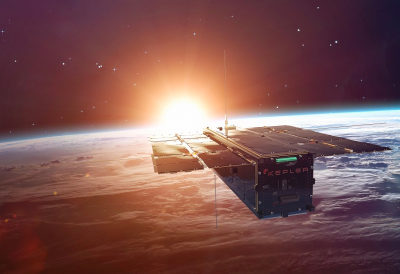 Most price competitive and lead times as fast as 5 days

Their first satellite successfully launched and now in orbit

Getting a satellite into orbit is not an easy task, especially when you’re trying to do it in 12 months with a strict budget in mind and for the first time.

But that’s what Kepler did, the Toronto-based team went from a sketch on a napkin to a functional nanosatellite launched into space in 365 days. Kepler is the first commercial company ever to launch and successfully operate a LEO communications satellite in Ku-band, a frequency band capable of transporting large amounts of data and at low cost

Kepler Communications was founded in 2015 by four graduate founders from the University of Toronto. They joined startup accelerator Techstars Seattle in 2016 raising $5M in seed funding. Now, in 2018, they have successfully launched their first satellite into orbit from a site in China with the second scheduled later this year.

The ultimate goal for Kepler, simply put, is to build a low-cost in-space telecommunication network for space-borne assets. Kepler aims at building a space infrastructure capable of providing connectivity to other satellites, delivering real-time command and control through its constellation of low-earth orbit (LEO) satellites.

At the moment, satellite connectivity is extremely expensive for remote companies in industries such as maritime, mining, agriculture and oil & gas. Moreover, many remote operations suffer a lack of access to fiber or cellular services, having no other option than to move data around via traditional satellites.

As its constellation grows, Kepler offers a global satellite data backhaul service making use of its early satellites’ capabilities. This store-and-forward service can provide satellite communication, for example allowing geographically sparse operations and teams to share large multimedia files through a satellite-updated media vault, or transfer large volumes of astronomy, seismology, weather and other science data collected at the most remote locations on Earth.

One of Kepler challenges was finding a manufacturing partner that could keep up with the speed of iteration. Paired with a need for that partner to provide manufacturing at all stages of the design cycle. Speaking with Adam Latour, Lead Product Engineer and Jared Bottoms, Lead Systems Engineer, they broke down their rapid design and manufacturing process:

“We employ a hybrid of methodologies for development. Starting with a general system we want to use, we then block out the architecture to get a general idea which gives us our driving requirements. Then we jump into our first design, build it and analyze. This process is then repeated through “trial and engineer” until we have a part we feel confident will work as it should.”

Keeping up with Kepler

Kepler Communication’s approach has been to do rapid first prototypes of new ideas and iterate quickly to fail fast and fail forward. Within this framework, Kepler needs to source parts from prototype-grade materials to high-quality space materials in the later stages of development. Using Hubs has allowed them to get parts arriving in hand within a week of parts being submitted. Jared goes on to explain:

“If one of the test parts is performing exceptionally well then we pull it out of the design cycle and just go for it. That’s why we need solutions like Hubs where we can rapidly build, rapidly test and then move onto the next stage of manufacturing, knowing we can easily source the parts we need for that next stage by just uploading a STEP file for an instant quote.”

Quotes in 2 seconds instead of 2 weeks

With time being of the essence, the traditional experience of getting a quotation just didn’t cut it anymore. Via the Hubs platform, you can get instant pricing on a wide selection of CNC machining materials, making it easy to check costs and lead times. Adam explains their previous method of getting quotations:

“The process of getting an order done on Hubs is what you want as an engineer with limited time. It’s really quick and removes a lot of the front end work you have to put in. For my first order I had a reasonable quote in 30 minutes and now I can also get them instantly on certain materials. Previously you’d have a week or two for set-up and this is now all broken down into one simple online experience. The quotation speed also doesn’t affect the price as you don’t have machinists making risk-averse and overly conservative estimates on a part when quoting in a rush.”

From rapid prototypes to parts in space

Here’s a small selection of parts produced by Hubs for Kepler Space including information on their application and finish. CNC machining was used as the manufacturing technology.

This was an early design iteration of a bracket used on an early configuration of one of the first satellite configurations. The material is aluminum 6061 which then received a black anodized finish.

This part was eventually used onboard the spacecraft. It's a heat shield that absorbs excess heat from an outside source by either dissipating, reflecting or simply absorbing the heat. On the left is a mounted 2nd iteration of the SDR shield alongside five other iterations. The material used was Aluminum 7075 with an Alodine 1200 coating.

Mega constellations and beyond

The Kepler Space team has done exceptionally well at creating part development processes that allow them to innovate at extremely high speeds paired with a talented team (find out more about their development process here ). Learning from every iteration they create and engineer as they go. This process has led them to put their first nanosatellite into orbit, opening the door for future satellites to join their constellation.

Hubs’ role within this was to take the risk out of sourcing for Kepler Communication’s engineers by giving them a platform where they can source their parts quickly and know they can rely on the quality delivered. Saving vital time for engineers so they can spend it where it matters on developing new parts and helping Kepler towards their goal of creating a mega constellation which is capable of being the network that connects Earth to space.

How this Dutch company is bringing bicycle manufacturing closer to home

Try the new Ultimaker S5 on Hubs
In this post, we sat down with Paul Heiden, SVP Product Management of Ultimaker, to give you an insight into the process of developing the S5.
Next