Find out how Hubs helped Ampyx Power hit major milestones in its mission to develop a better way to harvest wind energy with autonomous aviation technology. 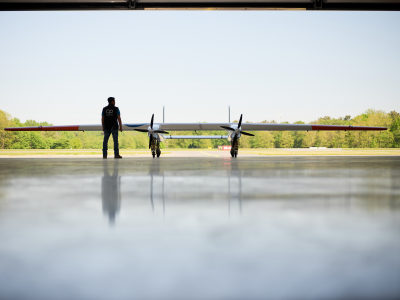 The Hague, The Netherlands 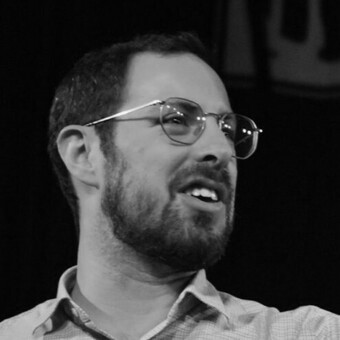 "One thing that we learned over time is that there is a lot more under the hood than initially expected. We came in viewing Hubs as an alternative to any other standard machining supplier, but it is actually quite different and a lot better - there are so many more material options, tolerances, specializations, surface finishes and overall capabilities available. And it is painless. That’s the biggest thing."

When you think of wind power, you look to the horizon expecting to see a skyline crowded with steel structures. Wind turbine technology dominates the onshore and offshore wind power sectors. For Ampyx Power , however, the possibilities for wind energy solutions go way beyond turbine technology.

Ampyx Power, founded in 2008 and headquartered in The Hague in The Netherlands, is an airborne wind energy technologies innovator and a leader in this nascent field. The company aims to support the net-zero economy by complementing (and in some cases replacing) resource-heavy turbines with tethered aircraft and sophisticated software.

Ampyx Power is gearing up for an eventful 2022. Since 2015, the company has been working on the third major iteration of their airborne wind energy system, the AP-3, and is gearing up to test this technology to prove its efficacy.

“The promise of this technology is that it provides a very creative and new way to harvest wind energy,” said Kevin Rand, Ampyx Power’s AP-3 Program Manager. “What we envision is that it will form part of a broader ecosystem of technologies.”

Getting this incredibly complex system - consisting of an autonomous aircraft, tether, proprietary launching and landing system and other ground equipment - off the ground has been a monumental effort. For Rand and the Ampyx Power team, working with Hubs’ platform has been essential to getting to this stage.

In most cases, airborne wind energy systems comprise a soft or rigid kite that is tethered to generator equipment on the ground. These systems harvest mechanical energy in the wind and convert it into electricity using earthbound technology.

According to Rand, “most of the material you’d otherwise need to place power generation equipment in the sky can be replaced with a tether and elegant software.”

What distinguishes Ampyx Power is its highly efficient rigid kite design and the capability to perform traditional horizontal launches and landings. Combining these features yields a major increase in overall system performance. “The aircraft generates tremendous amounts of lift, and we take that mechanical energy from the wind and convert it into electricity on the ground,” says Rand.

“Essentially, this is a catapult in reverse,” says Rand. “When the aircraft is coming in for a landing, we actually use the tether to transmit all that kinetic energy from the aircraft into waste heat on the ground. It’s all done in a fraction of a second.”

The AP-3 airborne wind energy system, intended to generate about 150 kW, is an impressive work of machinery. The aircraft has a 12-meter wingspan and weighs approximately 500kgs, and was designed to fly at nearly 80 meters per second at altitudes of 400-500 meters. Once operational, it will launch and land autonomously, making it ideal for offshore applications.

At its core, the AP-3 project demonstrates the commercial value and viability of Ampyx Power’s airborne wind energy technology. Rand says that “it shows our ability to do a full autonomous cycle from launching the aircraft into the air, doing power generation cycles, and landing the aircraft, all without human interaction.”

To construct the AP-3 aircraft, designed to function autonomously under significant amounts of mechanical and environmental strain, Ampyx Power needed to build a robust and flexible manufacturing supply chain.

According to Rand, the team needed to source a wide range of parts with a huge variety of tolerances, materials, coatings and many other strict parameters. Many of these parts would also have to withstand a tremendous amount of force transference and harsh environmental conditions.

“The thing with aviation parts is that they often require very high tolerances,” says Rand. “When you bring two parts together and they’re in a load-bearing function in the aircraft, the fit of those parts is essential to making sure that they function as you designed them to.”

A noteworthy example of Ampyx Power’s specific needs can be found in the landing gear extension-retraction mechanism. Critical to the safe functionality of the AP-3 aircraft, this mechanism builds off of traditional aviation design and is responsible for extending and retracting the aircraft’s landing gear.

“We really rely on the components in this mechanism to function as designed, so there’s a natural inclination on the one hand to over-specify the requirements for parts in our aircraft,” says Rand. “On the other hand, building an experimental aircraft is a process that requires a lot of iteration. As a small company on a limited budget, we have to get the balance between these priorities just right because we have so little margin for error.”

Making matters more complex for sourcing parts, Ampyx Power was planning to build only two aircraft. This meant sourcing only a finite number of parts - roughly the quantity of a prototyping run - with production-level quality and complexity. This is where Hubs’ platform and instant quoting tool became conducive to Ampyx Power finding the right parts within a productive time frame.

Getting off the ground with Hubs

To date, Ampyx Power has used Hubs’ platform for a wide range of applications, sourcing several hundred custom parts for critical systems like the landing gear, control surface mechanisms, arresting hook and aircraft structure, as well as for testing rigs and other general-purpose equipment.

The platform’s flexibility and DFM insight have been especially key for Ampyx Power, as these resources have accelerated the team’s ability to iterate and test, rather than spend exhaustive amounts of time on design and simulation for the AP-3.

“With the Hubs system, you get automatic feedback about part manufacturability,” says Rand. “There isn’t as much of a penalty for the mistakes that we do make, and having the flexibility to try again with quick turnaround times is huge for our program."

In partnering with Hubs and using our platform, the Ampyx Power team found that previously established manufacturing processes and more traditional ways of working began to fall by the wayside. “You don’t need to have that initial conversation with a manufacturer to establish what’s possible first before they decide whether to commit to the production of your component,” says Rand.

"With other machining suppliers, there’s an unspoken aspect of the conversation where they just don't want to make the feature as we describe it, but with Hubs, it's very pleasing not to have to compromise the design."

And though Hubs has endeavored to provide Ampyx Power with better unit pricing, one of the major value adds has been the platform’s reduced lead times. Prior to working with Hubs, Ampyx Power engineers would wait six to twelve weeks for certain parts, especially during the protracted disruptions caused by the pandemic. Now, this is no longer a limiting factor. “When we need a part, it’s available,” says Rand.

“As a small company, oftentimes we are playing with that balance of trying to make parts that aren’t ridiculously expensive or take forever to procure, and arrive in a timeframe that allows us to experiment, iterate and play,” says Rand.

“Much of the time, we’re able to work with slightly lower tolerances in exchange for that benefit on lead time and price. In that way, Hubs has been a really perfect match for us.”

Proving the future of Ampyx Power

Ampyx Power has several key milestones to hit in 2022. The first is the AP-3’s low-speed taxi test, which will take place at the company’s current operations facility in Breda, also in The Netherlands. In this test, Ampyx Power will taxi the aircraft on the runway and get it up to speeds around 30 km/hr, to see how the vehicle handles before attempting a high-speed taxi and a pivotal first flight in Spain.

“At some point, we will have performed every check, every test and every procedure to verify that the vehicle is ready for flight,” says Rand. “That’s when we’ll feel confident to put it all on the line and go for it.”

After completing the low-speed taxi test, Ampyx Power will move to a flight test center in Spain, complete high-speed taxi tests and even attempt a first flight. This will tell the team how well the aircraft handles once it’s in the air, and confirm that the autonomous control systems are functioning as the team expects.

In the meantime, another team is constructing a dedicated test site in Ireland. At this site, Ampyx Power will install a full AP-3 power generation facility to verify the platform’s autonomous functionality and performance. The facility will feature a rotating platform that’s recessed into the ground, from which the aircraft will be launched and captured. The core equipment required for converting the mechanical energy harvested by the aircraft into electricity will be housed here as well.

“For us, the launch and land platform is a key component in this technology because our ultimate goal is  to go offshore, where we must reduce the frequency with which service boats are needed to maintain equipment,” says Rand. “Being able to do all of this with minimal human interaction and intervention is essential to the way this product is designed to operate.”

Ampyx Power will spend the following two years at this site to go through as many power generation flights as possible to understand how the system performs, before moving on to what Rand hopes will be the commercialization of Ampyx Power’s technology.  Rand says, “the data we collect will be essential to the design of our next generation product.”

A fundamental factor in achieving this commercialization milestone will be retaining a robust and flexible manufacturing supply chain, able to ensure that Ampyx Power can scale their solution for manufacturability far beyond the technology demonstration phase.

For Rand and his team, this will involve working with a supply chain and “production environment with the flexibility and capacity to support what will turn out to be thousands of airborne wind energy systems and all of the parts included there.”

So far, Hubs has been a key contributor to this mission, especially moving from initial designs to getting the aircraft ready for this testing period. “One thing that we learned over time is that there is a lot more under the hood than initially expected,” says Rand. “We came in viewing Hubs as an alternative to any other standard machining supplier, but it is actually quite different and a lot better - there are so many more material options, tolerances, specializations, surface finishes and overall capabilities available. And it is painless. That’s the biggest thing.”

This next phase amplifies the potential for new vistas for onshore and offshore wind power generation. Hubs is excited to help Ampyx Power continue innovating toward this more autonomous and diversified sustainable energy ecosystem, and seeing custom parts take to the skies.

Find out how other companies are using Hubs to speed up innovation .

What’s missing in manufacturing? Experts weigh in with innovations we need by 2025

New five-day lead times for your CNC parts
We're speeding up our CNC machining services. Get your CNC machined parts in five days.
×