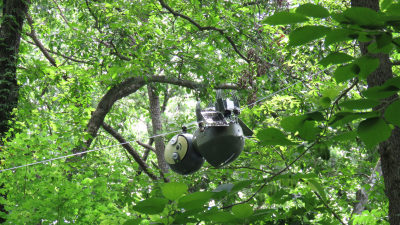 “The price offered by Hubs was also relatively affordable, and it was particularly useful to receive a quote instantly after changing a colour or certain specification.” - Gennaro Notomista, PhD student at Georgia Tech

Currently deployed in the Atlanta Botanical Garden, the SlothBot can run (or climb) forever without ever needing to be charged through a power outlet. An extremely energy efficient robot, the SlothBot monitors environmental factors like temperature, weather and carbon dioxide levels.

How does the SlothBot have such a long battery life? Number one: it hangs on a cable and switches off all motors while stationary, which would be impossible for a drone. Secondly it traverses at a slow, slothlike speed.

Programmed with control algorithms to only move when necessary, if the SlothBot is low on charge, it will automatically move until its light intensity and current sensors communicate that enough power is flowing into the battery via its solar panels.

The resulting behavior is very similar to a sloth, moving very slowly and only when absolutely necessary. “That was the reason we shaped the robot like a sloth: because we wanted to convey the message of slowness by design and energy efficiency,” explains Gennaro Notomista, PhD student at Georgia Tech. Energy efficiency is essential in the environmental monitoring world where processes take place over very long periods of time.

Making a robot into a sloth

After first developing the control design, the first prototype was 3D printed in-house and consisted of a 5cm robot which moved on one wire with one wheel. “The first tiny robot prototype was the implementation of the robotic algorithms, where we basically had a microcontroller with a solar panel and a very small lithium battery,” comments Gennaro, “We were trying to see, with the controllers we developed, if the robot was able to move in order to recharge.”

The second prototype design tested the mechanism to switch between cables in a fail-safe way. “The main problem was that if you want to switch wires, you can’t mount components on the top of the wires without disconnecting the electronics circuit inside,” adds Gennaro, “So the idea there was to balance the forces in such a way that could mount everything below.”

After 4 iterations to find the right weighting, and to remove unnecessary weight, Gennaro moved on to the last stage: designing the SlothBot shell.

“Because the SlothBot would be deployed outdoors, we wanted a material for the shell that was at least rain and UV resistant,” explains Gennaro. He settled on PLA Pro, manufactured using FDM 3D printing, which is strong enough to support larger parts, and takes very well to an additional protective rain and UV resistant coating.

“We were also considering using carbon fiber as it would have been stronger, but besides being much more expensive, we wanted a material we could color, which wasn’t possible with carbon fiber,” adds Gennaro, “Also introducing too much rigidity isn’t always a good thing because it means, when the robot hits something, stress is more easily transferred to the components inside the shell. We’d prefer the shell to break over damaging the components inside.”

Besides the outer shell, the SlothBot consists of a waterproof tube which houses all the electronics parts, except the off-the-shelf motors and sensors.

Getting large 3D printed parts at a competitive price

To produce the shell of the SlothBot, Gennaro outsourced all the parts needed to Hubs. “We were looking for companies that produced large 3D printed parts in different colors -- a service a lot of manufacturers on the market didn’t provide,” explains Gennaro, “The price offered by Hubs was also relatively affordable, and it was particularly useful to receive a quote instantly after changing a colour or certain specification.”

What’s next for SlothBot?

Deployed in the Atlanta Botanical Garden, the first SlothBot runs on a single wire and is used to entertain visitors, just as much as it’s used for environmental monitoring for conservation purposes.

Gennaro’s plan for the future is to use the SlothBot for agricultural monitoring, in particular to monitor pollination. For this to be possible, the SlothBot would need to be installed with a very low power satellite connection, so that it can be deployed in the mountains, or areas with no cellular connection (and maybe even interact with real-life sloths!). A camera would also need to be mounted on the head of the robot and paired with machine learning algorithms in order to recognize when a pollinator lands on a flower.

Rethinking the traditional bicycle trailer – and getting it to market faster

Manufacturing a fleet of drones to scale reforestation

Manufacturing a fleet of drones to scale reforestation
What if you could fight climate change with a fleet of tree-planting drones? That’s what DroneSeed is striving towards. With custom-built drones for each project and tight turnaround times, the Seattle-based startup leverages rapid manufacturing technologies to stay nimble.