How LPS reduced their manufacturing costs by 50% with instant Design for Manufacturing feedback.

As LPS perfected their LaserTrain design, the team found themselves closing in on a tight deadline and limited budget. By simply uploading their designs for a CNC machining quote, they could instantly check their parts for issues that made them difficult or more expensive to produce. 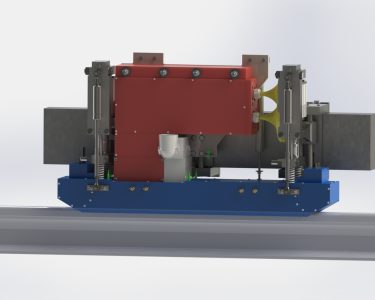 As LPS perfected their LaserTrain design, the team found themselves closing in on a tight deadline and limited budget. By simply uploading their designs for a CNC machining quote, they could instantly check their parts for issues that made them difficult or more expensive to produce.

Anyone who travels by train is familiar with delays. Track contamination such as rust, oil and most notoriously autumn leaves cause the tracks to become slippery. This decreases acceleration and leads to an array of safety issues and increased maintenance. Amsterdam-based LPS has developed the state-of-the-art solution which efficiently cleans the track, the LaserTrain.

A few dedicated LaserTrains can clean an entire railway network. Using high powered lasers, the contamination layer is fully removed from the top of the railhead. The only required input is a source of energy, giving the LaserTrain an unprecedented cleaning range. Compared to its outdated rivals such as Sandite and the waterjet trains, the LaserTrain has a higher efficiency, better range, is the only sustainable option and the only one that cleans the railway track completely.

The development of the entire LaserTrain was done in-house and LPS is the only company to offer this technology. The ongoing development has led to the first LaserTrain running for its second year at 40 km/h in New York. Due to a recent upgrade in technology, a 80 km/h model is also available.

Closing in on a tight deadline and limited budget

“When we started working with Hubs, we noticed an immediate difference in lead time and product cost. Using the DfM tools for CNC machining to quickly iterate throughout the whole design process, we managed to reduce production costs by up to 50%“

After a year of testing in the US, LPS was ready to advance the LaserTrain to a higher level. Incorporating new updates and keeping in mind all the small details takes thorough engineering and thus time. With the clock ticking towards the 2019 autumn, when the LaserTrain is most necessary, LPS Co-founder Harm Medendorp's team was closing in on a tight deadline – the updated LaserTrain needed to be shipped across an ocean on time and perform the entire leaf season.

Medendorp says there’s about  25 systems in and on the train that help control and work the laser system. Due to its complexity, LPS uses almost every possible material, including Heavy-duty steel, glass, aircraft-grade, and regular aluminum, rubber, and plastic. “The only material we don’t use is carbon,” he says.

Previously most testing was done by either simulation, 3D-printed parts and only occasionally fully produced prototypes. What the team needed was a supplier that made it feasible to produce their new parts efficiently and give good feedback on how to simplify parts for production. The goal was to improve reliability, reduce costs and get a shorter lead time.

Before working with the Hubs, LPS had to keep track of a long list of suppliers, which became a herculean task. Sourcing from different providers and manufacturers made it hard to control quality and leads to unwanted supplier risks. In some cases, LPS was dealing with lead times of over ten weeks.

“Next year we are aiming for several LaserTrains and we can now do this without investing in production machines, as we can easily understand what the economies of scale are in what Hubs can offer.”

LPS chose Hubs because of its 1-on-1 support, fast feedback loop and the ability to reduce costs throughout its network of suppliers. It also didn’t hurt that both organizations are local.

By simply uploading their designs for a CNC machining quote, they could instantly check how parts could be simplified for production. By repeating this throughout the whole design process, they managed to reduce production costs by 50% for the mechanical parts.

Hubs also brought additional expertise with its Design for Manufacturing portal. Medendorp says that using the software not only helped his team, but Hubs' extra support helped them spot three manufacturing errors before they went into production. It also helped them understand what was driving the cost of each part.

Get instant DfM feedback and see how to cut the costs for your CNC parts by uploading them to the Hubs platform.

Read more about how the DfM feedback tools work here.

Hubs Student Grant 2019 winners announced
We are announcing today the winners and finalists of the third Hubs Student Grant. The grant had another exceptional reception from students from all around the world, submitting diverse projects spanning from engineering and product design to robotics and art.
Next

Robert Schouwenburg is Hubs’ new Managing Director USA
One of the original Co-founders of Shapeways, Robert Schouwenburg will be bringing his industry experience to expanding Hubs’ presence in the North American market from our new U.S. headquarters at mHUB in Chicago.
×