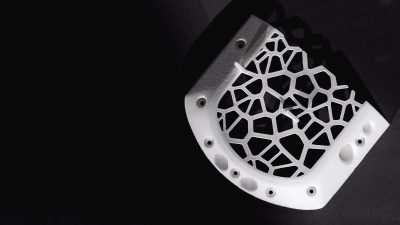 3D printing is an additive manufacturing (AM) technology that builds parts one layer at a time. It offers many distinct advantages over traditional manufacturing techniques, including faster production times and a distributed supply chain.

There are many applications where 3D printing is able to deliver parts quicker, with comparable (or higher) accuracy than traditional manufacturing can achieve, and using more cost-efficient and sustainable materials.

This being the case, the question of whether 3D printing will replace traditional manufacturing has persisted since the advent of AM. There isn’t really a short answer to this question, other than to say that while 3D printing may not completely replace traditional systems soon, it’s already outpacing these processes for many applications.

Understanding what makes 3D printing useful and even optimal for manufacturing lets designers make better decisions when developing products and selecting manufacturing processes. In this article, we cover the key advantages and benefits of 3D printing across a range of applications and industries.

Want a refresher on all things 3D printing?

How fast is 3D printing?

One of the main advantages of 3D printing is the speed at which you can produce parts. Additive manufacturing methods tend to outpace traditional processes. With 3D printing, you can upload complex CAD models and designs and immediately start printing. The benefit here is the rapid verification and development of design ideas.

Where in the past it may have taken days or even weeks to receive a prototype, 3D printing places a model in the hands of the designer within hours. SLS (selective laser sintering), for instance, can print a full build with hundreds of parts simultaneously in roughly 16 hours, including the time required for heating and cooldown.

The ability to produce functional end parts at low to mid volumes offers a huge time-saving advantage when compared to traditional manufacturing techniques (often the lead time on an injection molding die alone can be weeks).

As well, 3D printing is essentially available 24 hours a day. You can run a 3D printer without an operator, so your jig or fixture can be printed when the facility’s lights are off. Strong, functional parts can be ready for post-processing or use when your employees and operators arrive the morning after a print.

One of the biggest concerns for a designer is how to manufacture a part as efficiently as possible, especially during time- and budget-sensitive phases like prototyping.

With traditional manufacturing, parts go through many manufacturing steps before they’re ready to go. And the order of these steps affects the quality and manufacturability of your design. 3D printing manufactures parts in a single step, significantly amplifying the efficiency from design to production.

Instead of enduring long lead times to receive material stock from halfway around the world only to waste a significant amount of it (with traditional and CNC systems), 3D printing can give you a part to validate your design while using almost 100% of the original feedstock. That way you know you have the right design much faster.

Want to level up your 3D printing design skills?

Get our design rules poster

Is 3D printing expensive or cost-efficient? Calculating for value

Calculating the cost of 3D printing depends on a variety of factors, including the operational costs of the machines themselves, the choice of materials and technology and the (minimal) labor costs.

Most desktop 3D printers use the same amount of power as a laptop computer. Industrial additive manufacturing technologies consume a high amount of energy to produce a single part. However, the ability to produce complex geometries in a single step results in higher efficiency and turnaround. Machine operation costs are typically the lowest contributor to the overall cost of manufacture.

The material cost of 3D printing varies significantly by technology, though it’s important to note that it’s the biggest contributor to the cost of a part. As well, the range of materials available for 3D printing makes it challenging to neatly compare the costs between traditional manufacturing and additive.

Desktop FDM printers use filament coils that cost around $25 per kg, while SLA printing requires resin that retails for approximately $150 per liter. Nylon powder used in SLS costs around $70 per kg and comparable nylon pellets used in injection molding can be purchased for as little as $2 to $5 per kg.

At the end of the day, your choice of materials will be the most significant factor in determining the cost of 3D printing parts. If you use premier, high heat materials like Ultem, for instance, you’re going to pay quite a bit for your components. Production-focused processes that use Nylon powder will end up being more affordable.

One of the main advantages of 3D printing is the low cost of labor. Post-processing aside, the majority of 3D printers only require an operator to upload a CAD file and start the print. The machine then follows a completely automated process to produce the part. 3D printing doesn’t require highly-skilled machinists and specialized operators in many cases, making the labor costs far lower than traditional manufacturing.

For the production of prototypes that verify the form and fit, 3D printing is significantly cheaper than other manufacturing methods, like injection molding. It’s often cost-competitive for manufacturing one-off functional parts. Traditional manufacturing techniques become more cost-effective as volume increases and the high setup costs are justified by the large volumes of production, though with processes like SLS and MJF, this may change soon.

How does 3D printing reduce risk?

Receiving a faulty prototype costs designers and engineers time and money. Changes, even small ones, in a mold or fabrication method will have a significant financial impact.

Being able to verify a design by printing a production-ready prototype before investing in expensive manufacturing equipment (e.g. molds or tooling and jigs) eliminates the risk during the prototyping process. This helps with building confidence in your design before making the large investments required for larger production runs and even mass production.

Since 3D printers build parts one layer at a time, as opposed to milling away raw material from an existing block, design requirements including draft angles, undercuts and tool access do not apply.

While there are some restrictions on the minimum size features that can be accurately printed, most of the limitations of additive manufacturing center around how to optimally orient a print to reduce support dependency and the likelihood of print failure. This gives designers a large amount of design freedom and enables the easy creation of very complex geometries.

Since 3D printing and additive manufacturing essentially provide designers the ability to produce complex geometries in a wide range of quantities, it’s perfectly suited for the one-off production of custom products.

Many industries, including the medical and dental fields, have leveraged this particular benefit in manufacturing custom prosthetics, implants and dental aids. From these innovations in medicine to sporting gear tailored to specific athletes and custom sunglasses and fashion accessories, 3D printing allows for single production runs in a way that’s unfeasible via traditional methods.

Subtractive manufacturing methods, such as CNC milling or turning, remove a significant amount of material from an initial block, resulting in high volumes of waste material.

3D printing and other additive manufacturing methods, in contrast, produce relatively little waste. Aside from excess materials used to print support structures, 3D printing generally only uses the material required to build a part. Most 3D printing processes use raw materials that can be recycled and reused over the course of several production runs, especially if we’re referring to powder-based technologies like SLS and MJF.

3D printing has also strengthened the case for distributed manufacturing. A huge increase in the number of 3D printers and additive machines in the market has improved access to the technology, reducing the distance prototypes need to be shipped.

As well, it’s relatively simple to learn how to operate most desktop 3D printers. This means that designers don’t have to rely on off-site manufacturers quite as much, especially when it comes to rapid prototyping.

Due to the relatively low facility investment, 3D printing can be accessible in areas where it’s not sustainable for traditional manufacturing. Certain areas aren’t zoned for industrial purposes and many businesses simply don’t have the physical space to bring in large manufacturing resources. Printing on-site or via distributed networks reduces shipping costs, both financially and environmentally linked.

In 2015 alone, more than 278,000 additive manufacturing printers valued at under $5000 were sold globally. The number of printers sold doubled consistently since. What was originally a niche technology accessible only to a small segment of the manufacturing industry is now a readily available and cost-competitive method of part production utilized by a vast range of industries.

Although 3D printing is more accessible than ever, knowing what technology to choose can become daunting. Using a service like Hubs gives you the confidence of using proven technologies and provides access to printers that can often require significant capital investments and expertise.

Get a free, instant quote today

What are the main benefits of 3D printing?

There are many benefits to 3D printing across a myriad of manufacturing applications. 3D printing is often faster than traditional technologies and produces parts in a single step. It’s also more cost-effective for the quality of parts and time spent producing them. 3D printing offers designers more design freedom and customization options while being easier to access and more sustainable overall.

Does 3D printing have disadvantages?

While 3D printing comes with loads of advantages, there are also drawbacks to consider. The number of available material options is not unlimited, and certain technologies can only accommodate certain plastics and metals. Also, quite a few polymers aren’t food safe.

Each type of 3D printer is different in terms of how much energy it takes per print or production run. For instance, desktop FDM printers use a lot less energy than their industrial counterparts. 3D printing is overall more efficient than traditional manufacturing thanks to reduced material waste and part consolidation.

What are the most common materials used for 3D printing?

In general, 3D printing uses plastics to produce parts, though some technologies can print with metal. There are many materials available that provide specific benefits, including higher strength, better heat resistance and water repellency. The most popular polymers on the Hubs platform are PLA, ABS and PETG.